Jamie Whincup and Craig Lowndes will start the 2019 Sandown 500 from pole position thanks to a dominant Whincup performance in the second heat race. 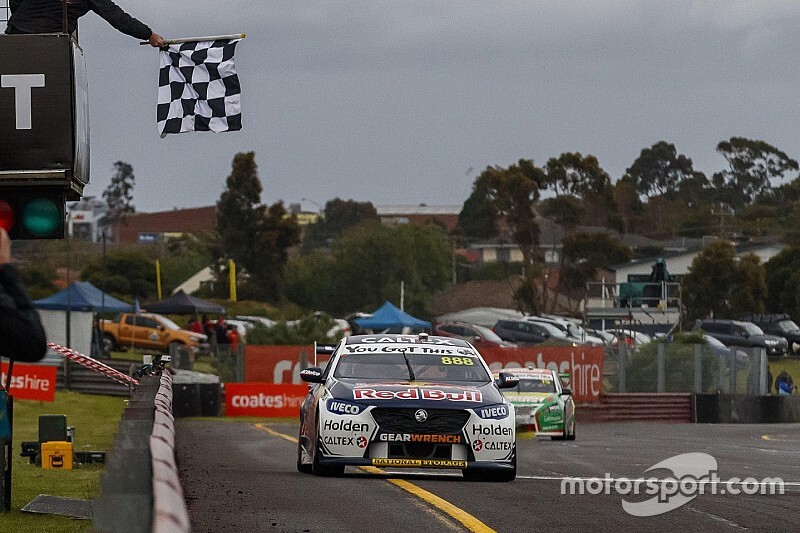 The seven-times series champion cruised to a 7.3s win in a dramatic wet weather race, he and Lowndes set to share the front row with the Andre Heimgartner/Bryce Fullwood Nissan for tomorrow's 500-kilometre race.

It was all about the start for Whincup, the polesitter taking a comfortable lead into the first corner.

There was drama behind him, however, with teammate Shane van Gisbergen clattering into the side of Anton De Pasquale and sending them both into a spin.

That took two serious contenders out of the running, and left Whincup with a sizeable gap from the get-go.

From there the only question mark was the weather, Whincup having opted for grooved tyres on a potentially-drying track. But the wet proved to be the right rubber, Whincup controlling the race to secure pole for tomorrow's final endurance race of the season.

"We've been a little bit hit and miss in the wet this year, we've had some good performances and some that haven't been so nice," said Whincup.

"[Engineer David] Cauchi did a great job with the strategy with the tyres. It's always touch and go, but that's why the engineers gets the big bucks to make the right calls and today we made the right one.

"The car was good and poles have been few and far between this year, so we'll certainly take this one."

Heimgartner emerged from the early chaos in second place, setting up a lonely run to the flag. He never looked like chasing down Whincup, but also finished more than 2s clear of David Reynolds and Will Davison.

Scott McLaughlin was forced to work hard for fifth place, climbing tyre pressures leaving him in the clutches of teammate Fabian Coulthard and Tickford's Lee Holdsworth.

The absolute star of the race, however, was wildcard rookie Brodie Kostecki. From 21st on the grid, the Holden driver stormed to a fine eighth place, his race included a well-executed move on former series champion James Courtney.

Chaz Mostert was another hard charger, rapidly going from the back of the grid to the midfield in the opening two laps before finishing ninth, one spot clear of Courtney.

Proving the clear divide between the wets and slicks starters, De Pasquale still managed to finish 13th – better than anyone that started on dry rubber – despite his first-lap spin and a subsequent drive-through.

That penalty was the most contentious part of the race, driving standards advisor Craig Baird initially judging De Pasquale to have cut van Gisbergen off into Turn 1.

Van Gisbergen, however, was quick to explain that the contact was his fault, Baird subsequently admitting that he got the call wrong and apologising to De Pasquale.