On the 10th lap, the left front assembly departed the racecar at the super-fast Hayshed section of the course and went on its own Phillip Island adventure.

Lee Holdsworth ended the Sargent Security Phillip Island 360 with disappointment after a thrilling start to this weekend’s final race.

The driver of the #4 IRWIN Tools E63 AMG was on-track to record his fourth consecutive event as the best placed of the three Erebus Motorsport V8 Supercars, however the front left spindle of his racecar had other ideas.

Holdsworth performed an outstanding three wide pass on Jonothan Webb and Tim Blanchard into the first turn on the eighth lap of this afternoon’s second and final race. 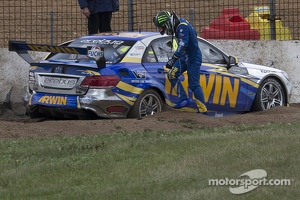 On the 10th lap, the left front assembly departed the racecar at the super-fast Hayshed section of the course and went on its own Phillip Island adventure. The wheel slammed into the fencing in front of the spectator area and although bitterly disappointed, Holdsworth was more releaved to see no one was injured in the incident.

Earlier in the day, he finished the first race of the afternoon in 17th position. This backed up his 14th position from yesterday’s two part race.

The IRWIN Tools-backed Erebus Motorsport team feels, although a tough weekend, it made some strong forward progress after identifying some areas that it can improve on to attack high speed circuits such as Phillip Island in the future.

Structurally, it will work on the front splitter, which showed some areas of weakness under the high downward aerodynamic pressure being placed on the front airdam.

Whilst needing immediate attention, Erebus Motorsport has outlined none of the problems are insurmountable and will be focusing on them from this week at its Yatala base ahead of the season finale - the Sydney 500 at Sydney Olympic Park.

Whincup holds off contenders for win at Phillip Island