Van Gisbergen stripped of win, penalty dumps him to fifth 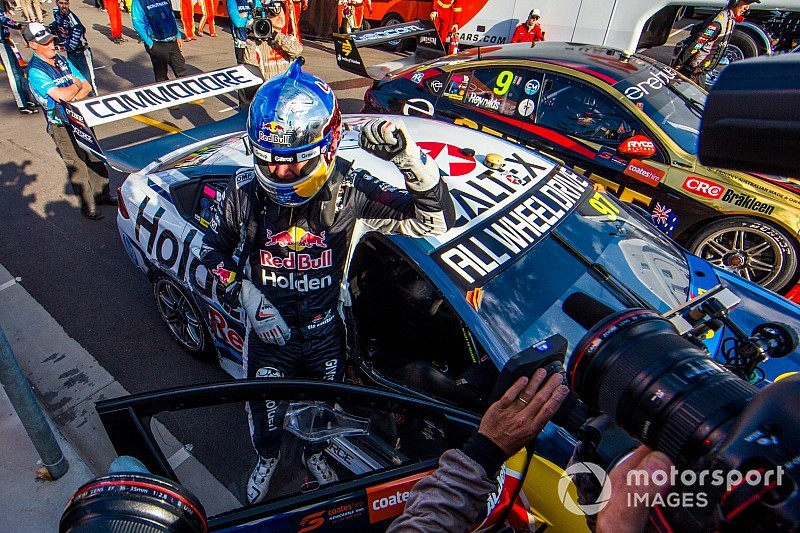 Shane van Gisbergen has been hit with a 25-second post-race penalty for a pitstop infringement in yesterday's race at Newcastle, dropping him to fifth and giving Scott McLaughlin a clear advantage going into today's Supercars title decider.

However, the result was swiftly thrown into doubt when officials investigated an alleged breach, TV footage having shown van Gisbergen's car being lowered off its jacks before refuelling was complete on his third and final stop.

The Deputy Race Director later recommended a penalty, although the final decision was deferred until this morning as Triple Eight Race Engineering argued its case.

According to the stewards' report, Triple Eight's argument was based on the incident not yielding a performance advantage, being a result of miscommunication between pit crew, and therefore not worthy of a penalty.

But that argument was unsuccessful, stewards confirming this morning that van Gisbergen has been slapped with a 25s penalty – the equivalent of a drive-through penalty – and dropped to fifth in the standings.

"The DRD submitted that a pitlane penalty is the appropriate penalty for a breach of Rule D25.6.3.2," read the report.

"He submitted that, while the driver of car #97 could not be said to have contributed to the breach, car #97 gained or stood to gain a sporting advantage by reason that it could take on more fuel within its elapsed pitstop time by keeping the coupling connected while the car was lowered.

"For that reason, and despite the infringement prejudicing the safety of team personnel, a team penalty is inappropriate.

"The respondent submitted that no sporting advantage was gained in this case, that any infringement was the result of miscommunication between team personnel and was unintended. He submitted that if any penalty is to be imposed, it should be a team penalty only.

"While we accept that the infringement was the result of a mistake and that no sporting advantage was intended, we agree with the DRD that by permitting the coupling to remain connected while a car is lowered allows the car to take on more fuel than it otherwise could. The volume of fuel in this case may have been small but the outcome of the race demonstrates the potential for fine tolerances in full volumes to affect the results.

"Even though several occurred some time in the past, we have had regard to the penalties applied to breaches of this rule previously. Save for two breaches where the circumstances were not comparable, a breach of the rule has consistently resulted in a pitlane penalty being applied."

The penalty gives McLaughlin the clear upper hand in the title fight, a 53-point advantage meaning he only needs to finish sixth or better today to claim a maiden crown.