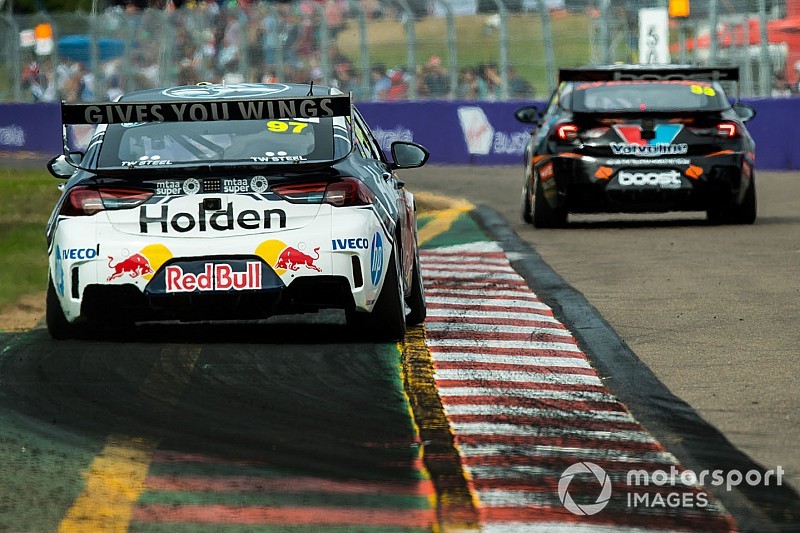 The Holden Commodore will undergo a fresh aero change ahead of the upcoming Supercars round at Pukekohe.

Off the back of a commanding performance by Ford's Mustang last time out at The Bend, speculation of a change to the Commodore's aero was rife by the end of last week.

Supercars has now officially confirmed that Triple Eight Race Engineering – the designated Holden homologator – did indeed apply for the Commodore's Vehicle Specification Document to be updated following The Bend.

The series has also confirmed it has green lit the changes, which include the removal of the high-level brake light detail from the tailgate, the addition of a gurney to the rear wing endplates along the trailing edge, and the extension of the front undertray.

The new aero package will debut in New Zealand next week.

“Triple Eight Race Engineering made the application to the Supercars Technical Department for an aerodynamic adjustment following the most recent event at Tailem Bend,” said Supercars' head of motorsport Adrian Burgess.

“Upon assessing the application and the information supplied, the Technical Department approved the submission as the delegated authority of the Supercars Commission.

“This adjustment will be in effect from the New Zealand round onwards.”

The seven Mustangs in the field at The Bend occupied five spots in the Top 10 in qualifying on both days, including a top three lock-out on the Sunday.

It was a top three lock-out for Ford's new racer in Sunday's race too, with six Mustangs among the first 10.

This is the fourth in-season aero change Supercars has made in 2019. The Mustang was first altered before the Perth round, with a first round of changes coming to the Commodore before Darwin.

The Nissan Altima, which came into the season with a new aero package, was then tweaked heading into The Bend.

So far this season, Mustangs have won 19 of the 22 races. Triple Eight is the only non-Ford team to register wins, two for Shane van Gisbergen and won for Jamie Whincup.

DJR Team Penske, meanwhile, has taken 18 of Ford's 19 wins, the other going to Tickford's Chaz Mostert.