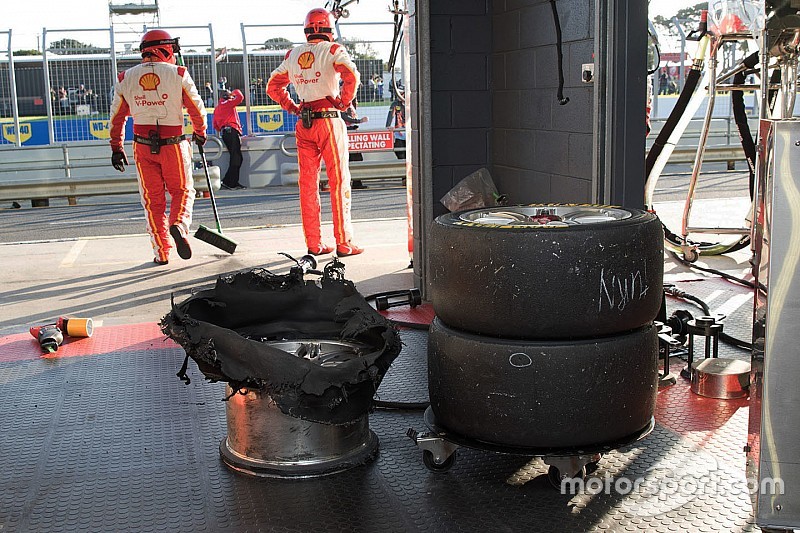 Supercars has moved to avoid a repeat of yesterday’s tyre failure-marred race by putting a revised minimum pressure limit and a maximum camber recommendation in place for today’s second 250-kilometre outing.

There were 13 rear and five front failures during yesterday’s race, Triple Eight, Tekno, and LD Motorsport the only teams unaffected by right-sided tyre issues.

The situation was referred to as ‘dangerous’ by Prodrive team boss Tim Edwards, the Supercars commission meeting both last night and again this morning to look for a solution.

It has now been decided that the minimum pressure will be raised from 17psi to 19psi, while camber recommendations have been reinforced in a bid to lessen the strain on right front and rear rubber.

“It is recommended that Teams consider the effects of static camber in relation to the setup of their Cars given the figures above,” read a bulletin handed to teams today.

“It is recommended that Teams and Drivers take into consideration all the factors mentioned above.

“In consultation with Dunlop, the Commission unanimously resolved to mandate an increase to the minimum tyre pressure (D18.1.13) from 17PSI to 19PSI for Race 6 of the Virgin Australia Supercars Championship.

“Accordingly, this will be enforced for Race 6 today.”

There has also be a cone placed on the broken line on the entry to pitlane, to make it clearer to drivers where they can and can’t place the car following yesterday’s controversial spate of penalties.