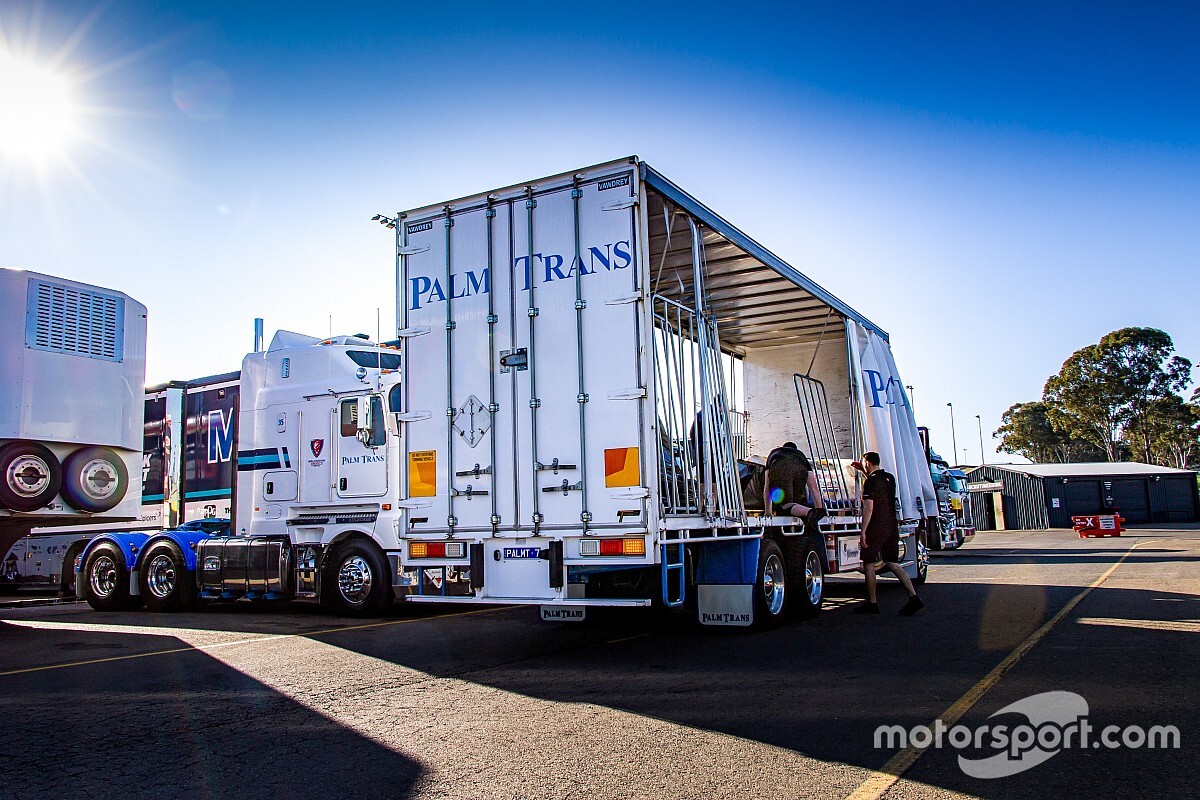 Walkinshaw Andretti United has brought a fresh batch of parts across the closed Victoria/New South Wales border ahead of this weekend's Sydney Supercars round.

With freight lines still open between the two states, despite the border being closed due to a fresh coronavirus outbreak in Melbourne, WAU has been able to get two trucks with spares into the Sydney Motorsport Park hub so far thanks to backer Palm Trans.

The second truck, which arrived at the circuit today, also included a pallet of parts for Kelly Racing, which is currently based on the Kelly family farm in Mildura, and parts for Super2 teams Image Racing and Anderson Motorsport.

The Melbourne-based Supercars and Super2 teams were all forced to flee Victoria with just a few hours' notice last Monday once the impending border closure was announced.

"We heard rumours early Monday morning last week that it looked like we had to get across the border ASAP, and we got all of our stuff together, but as you can imagine we had things that were still in the paint shop, bodywork that was still waiting to come up and tyres that weren't ready for us," explained WAU team manager Anthony McDonald.

"So we loaded as much as possible into a truck that day and got across the border. Then we spoke to Palm Trans, and they organised for us to get a truck down the workshop and load everything up that we had. I spoke to Supercars and they passed the message out to other teams from Victoria that we had a truck coming up."

McDonald expects the collaboration between the Melbourne-based teams to continue after this weekend, as the teams prepare to head straight to the Northern Territory for the Darwin Triple Crown.

"I think [the teams are] going to have to work together for at least the next month or two," he said.

"Our plan at the minute is to try and service the cars here [in Sydney] on Sunday night and Monday, and whatever stuff we need to get back to Melbourne we'll drop at Palm Trans. We'll put the message out to the Victorian teams if they need anything dropped down there. We'll get it to our workshop and they can come and collect it."

Formal plans for next week are yet to be set, however, with teams still waiting on direction from Supercars for what is expected to be a double-header in the NT.

"We'll have to work out how we get stuff to the Northern Territory and what the process will be after that," added McDonald.

"We're still waiting on some ruling to come through from Supercars, tyre rules, formats, all that sort of stuff for the double header. We'll still have to order in some tyres, order in some brakes, there will still be some bodywork we need up there for two events..."

The question marks include how team personnel will travel to Darwin, with McDonald explaining some crew members are keen to drive north after what will be more than two weeks cooped up in the SMP hotel.

"We're still trying to work out what we can and can't do," he said.

"I think some of our guys will fly up to Darwin, but we've got a group of guys that are keen to drive up there with the transporter just to see the sights. We've been locked in a hotel now for a week, so we're keen to get out and do something."