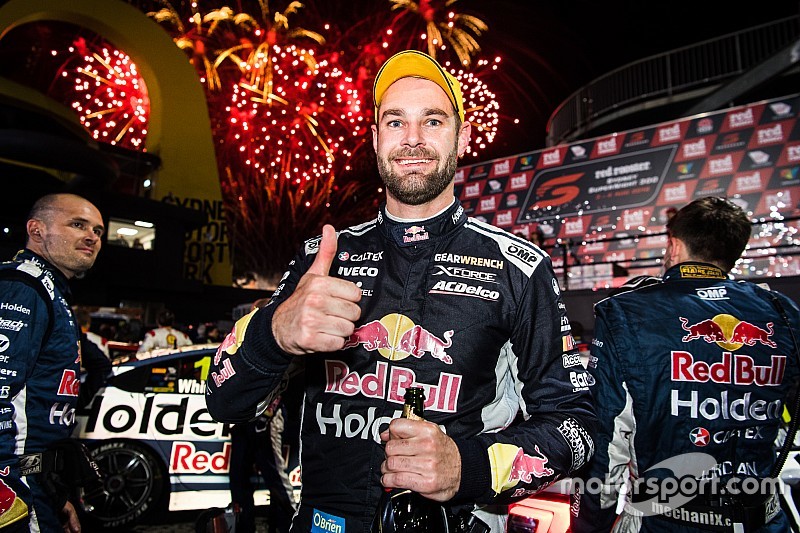 Red Bull Holden driver van Gisbergen used a late Safety Car to help tip what had been a delicately-poised battle with the leading Penske Ford in his favour, Whincup then giving his teammate a helping hand in the points with a brave charge to second in the closing stages.

The win leaves the title fight between van Gisbergen and McLaughlin wide open, the Penske driver's advantage slashed to 89 points thanks to Whincup's late heroics.

It was polesitter McLaughlin who made the best of the start, but only just. His teammate Fabian Coulthard did threaten as the pair raced towards Turn 2 on the first lap, McLaughlin holding firm on the inside line and ultimately opening the door for Coulthard to be rounded up by van Gisbergen.

From there the two title contenders ran in formation across the first stint, McLaughlin slowly edging away from the Red Bull Holden. The gap between the two was just over 2s when they both dived into the lane for their first stops, McLaughlin getting out ahead of his fellow Kiwi.

The second stint started in much the same way, the gap between the leaders ticking over to three seconds as the race approached the 30 lap mark. By the time they made their second stops on Lap 39 the gap was north of five seconds, McLaughlin well and truly in control.

The third stint saw Craig Lowndes lead the way thanks for a short-fill during the second stops. The veteran joined the mix in the second stint after passing Scott Pye for third, and even looked for a moment like he was going to chase down the leaders.

When the gap to McLaughlin and van Gisbergen stabilised at around 4.5s he opted to make his second stop, a combination of a short-fill and an undercut (having stopped five laps earlier than the leading pair) leaving him six seconds down the road.

That made it a three-way battle, Lowndes looking to maintain the advantage over McLaughlin to offset a longer final stop, while van Gisbergen kept the pressure on the Penske Ford from third spot.

On Lap 55 Lowndes and McLaughlin made it a straight fight for the lead by pitting at the same time, the gap between them 4.5s as they came into the lane. But the longer stop proved costly for Lowndes, McLaughlin emerging with the lead.

Van Gisbergen didn't make his stop for another four laps, taking advantage of the race's first Safety Car. The cause of the caution was Todd Hazelwood's Ford parting ways with its rear wing, which left debris on the front straight and sent the rookie on a wild ride through the Turn 1 gravel.

The stoppage itself didn't hand van Gisbergen the lead, but it did mean he was right on the back of McLaughlin and Lowndes for the Lap 62 restart, with rubber that was four laps younger.

Getting by Lowndes didn't take long, van Gisbergen mugging his Triple Eight teammate on the restart. He then set after McLaughlin, the leader going defensive as van Gisbergen desperately tried to find a way past.

The pair staged a thrilling battle for six laps, before van Gisbergen finally made his tyre advantage count and barged his way into the lead on Lap 68.

That was the decisive move, van Gisbergen able to control the pace to take a crucial win.

“It took a long time for the race to come alive, it was pretty stale and then the Safety Car came out. It was awesome,” said van Gisbergen.

“Scotty was driving really well, defended awesomely and I gave him a couple of bumps but he wasn’t fazed. Then I think he had some pick-up and I got through."

To make matters even better for van Gisbergen, his teammate Jamie Whincup ended up second. The reigning champion was lucky to even get going after having a flat battery before the warm-up lap, and spent much of the race seemingly out of the game.

The Safety Car worked well for him, though, despite initially meaning a double-stack behind van Gisbergen for his final stop. Having held on to fourth, he was suddenly well-placed in the queue behind the Safety Car.

Whincup was then able to pass Lowndes shortly after the restart, before closing up on the back of McLaughlin as the laps ticked down. With four to go he finally found a way by, making it a surprise one-two for the factory Holden squad and leaving McLaughlin to finish third.

“I tried so hard to keep them behind. Sorry to the Ford fans I couldn’t get it done for you, I’m absolutely gutted,” said McLaughlin.

“We had a great car today, had a great team, great pitstops and great strategy. Unfortunately the Safety Car came at the wrong time.

“But it’s a good points day and we’ll move on.”

Lowndes came home fourth after a tough run to the flag, followed by Chaz Mostert, Rick Kelly, and David Reynolds.