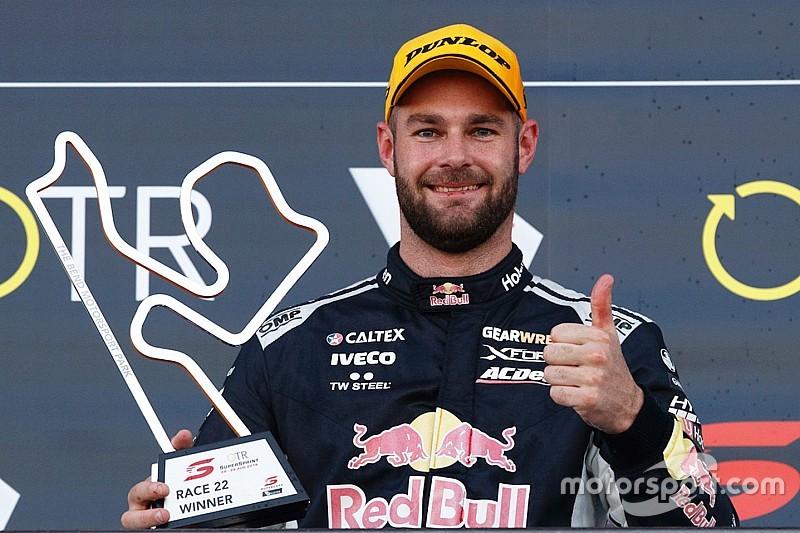 A dominant win in the first-ever Supercars race at The Bend Motorsport Park has helped Shane van Gisbergen close to within 41 points of series leader Scott McLaughlin.

The two Red Bull Holdens made their intentions clear from the outset, bolting off the line and into a four-second lead over the rest of the pack within three laps.

Initially it was polesitter Jamie Whincup with a narrow lead over van Gisbergen, until the Kiwi eased his way past his teammate on Lap 5.

That proved to be a pivotal move. Just two laps later a stranded Garth Tander led to a Safety Car, effectively forcing both of the leading Triple Eight Commodores into the lane together.

As a result Whincup was forced to stack, which dumped him down to eighth before the Lap 9 restart.

With Whincup effectively out of the running, van Gisbergen's only real challenge was from Rick Kelly. The Nissan driver was promoted from third to second during the caution, having passed teammate Michael Caruso just moments after van Gisbergen past Whincup.

But while Kelly looked sprightly enough at the restart, there was no genuine challenge for the lead. Within a handful of laps the lead was out to 2s, van Gisbergen stretching it to over 6s at the finish.

"Awesome race," said van Gisbergen. "I had a good battle with Jamie at the start, unfortunately he had to get put back. It was about staying on the track, it was so hard. There was one line, very easy to make a mistake. I just tried to behave."

Kelly and Caruso finished a lonely second and third, while Whincup pulled off an impressive recovery to charge his way back past Will Davison, McLaughlin, and Mark Winterbottom to finish fourth.

The most important of those passes was the one on McLaughlin. The points leader could easily have been gifted fifth spot by Whincup being double-stacked, but in the end the best he could manage was sixth.

That means the gap at the top of the standings is now just 41 points.

"We've got plenty of work to do, but at the end of the day we're stepping in the right direction," said McLaughlin. "We just need another big chunk again. We'll move on, we'll work as a team. We'll just get through it."

James Courtney finished up eighth behind Davison, the Walkinshaw Andretti United the big mover making up 16 spots on where he qualified.

Chaz Mostert and Craig Lowndes were the best of the cars to have pitted before the Safety Car, finishing ninth and 10th respectively.