Shane van Gisbergen ended the second Supercars practice session at The Bend Motorsport Park a full 0.5s clear of teammate Jamie Whincup, and the best part of a second ahead of the best non-Triple Eight car. 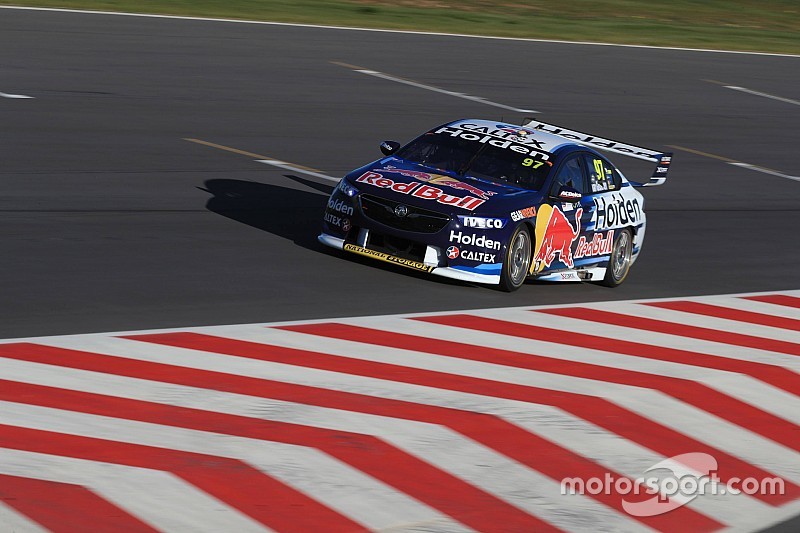 The Kiwi was the early pacesetter in the second 45-minute session at the all-new circuit, going top with a 1m50.165 – just 0.03s off Tim Slade's P1 benchmark – on his first attempt.

It wasn't until inside the final two minutes of the session that the early time was finally beaten, and even then there was only a few seconds when van Gisbergen wasn't on top.

That brief moment was Slade becoming the first driver to dip under the 1m50s bracket with a 1m49.709s – only for van Gisbergen to go almost a second quicker with a remarkable 1m48.749s.

That time left van Gisbergen not only as the only man in the 1m48s, 0.57ss clear of late improver Whincup and 0.95s ahead of Slade.

"The track is tough, there is probably people making mistakes. There's half a second in driving and a fair bit left in the car.We'll see the evolution of that over the weekend. But it's definitely a good way to start, it's a rush. It's fun."

Chaz Mostert was fourth fastest, despite being 1.4s off the pace and generally unhappy with his Tickford Ford.

"If you look at the times, we're a fair it off the front couple," said Mostert. "The way the car is feeling, that's the time it's given us and that's how far we feel like we're off the competition.

"To be fourth, I'm super surprised. It doesn't mean we have to get completely lost, we've probably got a good base to be inside that Top 10 for tomorrow. But definitely some work to be done."

Mark Winterbottom and Scott Pye rounded out the Top 10.

The trend of drivers pushing the limits in Practice 1 carried over to Practice 2, trips off the tarmac and onto the grass a regular occurrence.

Craig Lowndes in particular endured a number of wild rides off-track, and ended the session way down in 27th, 3.6s behind teammate van Gisbergen.

"There's a lot of debris," said the veteran. "I'm not going to use that as an excuse, it's just a lot of dust and dirt because people are cutting corners. We hit a few of them.

"We tried to do a race run then, and it didn't work. Obviously we went outside the window. So we tried to scramble back to a qualifying car and we had a crack on a new tyre at the end there but didn't complete the lap. The first part of that lap is pretty much matched on Jamie and Shane, so it's not all dire, but we need to do the time."