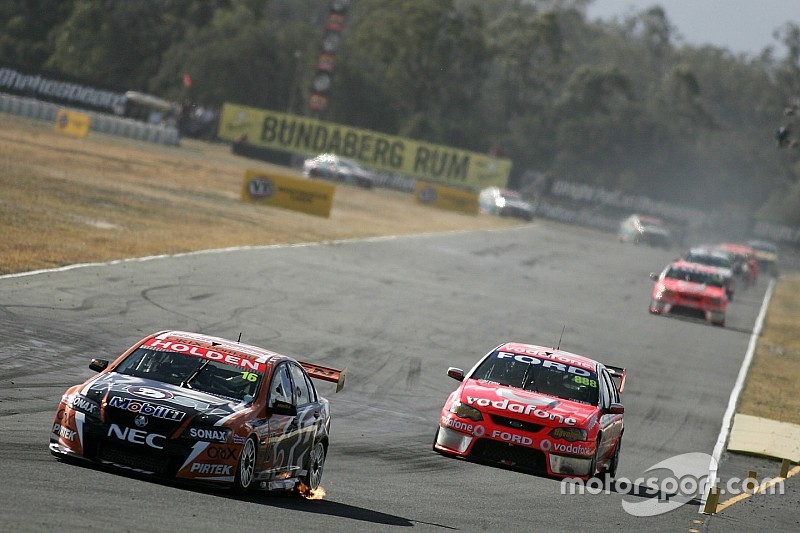 Garth Tander says Holden's top Supercars drivers were ordered 'not win by too much' during the 2007 season in order to keep parity claims at bay.

The brand new VE Commodore made a blinding start to the 2007 season, cars from the Walkinshaw garage winning the first eight races on the trot.

It wasn't until the opening race at Winton that Jamie Whincup racked up the revised BF Falcon's first win, which was followed by another six-race winning streak for the Holden.

Holden drivers would go on to win 25 of the 37 races that year.

According to Tander, won that year's title by two points over Whincup, the new Commodore could have been even more dominant in the early part of the season.

However he says the Holden Racing Team and HSV Dealer Team drivers were given a go-slow order by management, to avoid adding weight to parity claims coming from the Ford camp.

"It's funny, this current world of parity and chat that we have, we were actually told in the first half of that year that we weren't allowed to win by too much, by management at Clayton," Tander revealed on the V8 Sleuth podcast.

"There was one of the races at Perth, Skaifey was second and I was leading. Mark and I were battling pretty hard, because he wasn't happy that 'Toro Rosso' (HSVDT) was beating the main team (HRT).

"There was a Safety Car restart with about 10 laps to go, and Skaife was giving me plenty. So I was like 'righto, hammer down, we're going here'.

"We took off, and from 10 laps to go we finished the race first and second by about 15 or 16 seconds. So we got into trouble after that one...

"I know the Ford guys were blueing. It's funny how it just continues on 10 years later, it's just the other way around..."

Tander was the primary contributor to the VE's fast start to the season, claiming five consecutive wins as part of that initial block of eight straight.

Reflecting on that purple patch, he says it was a combination of some inside knowledge from engineer Mathew Nilsson, and a desire to capitalise on his own form.

"In the 18 months prior to the VE racing, Matty Nilsson, who was my engineer, was the project manager of the VE build for Clayton," Tander explained. "So he understood the car very, very well.

"When we hit the ground with it, we felt like Matty had a really good understanding of what we needed to do with the car. I was driving pretty well, I was pretty motivated after 2006, winning a lot of races but not the championship.

"So that year sort of came together."

NAPA to back Rossi/Hinchcliffe Bathurst wildcard