After botching the start that saw them holding both grid positions on the front row in Race One, HRT came back with a vengeance in the second race at Townsville. Garth Tander became the 11th different winner in 21 races this year, earning his 53rd career victory. 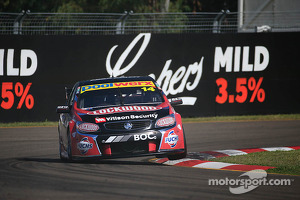 The start to this race was much calmer than its immediate predecessor, but it was not void of any incidents either. After getting door-slammed by James Moffat, Lee Holdsworth was sent nose-first into the tire barriers. Scott McLaughlin had a rough race that started going downhill when Shane Van Gisbergen knocked him out of the way at the start, costing him a number of positions. He would later need to serve a pass-through penalty for speeding on the pit lane, ruining his race.

The Norton Hornets and Erebus had another run-in after that opening lap skirmish, but it was the other two drivers this time around. Will Davison ran into the back of Michael Caruso while he sat in his pit box, damaging the car to the point where they were forced to retire it from the race. A furious Caruso was quoted as saying, "No doubt (I'll talk to him) if he's man enough to catch up to me." 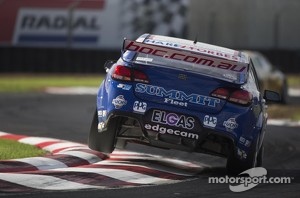 Jason Bright didn't have a very good day either, suffering a broken anti-roll bar, which severely hindered his efforts obviously. On the tenth lap, pole-sitter and then race leader Fabian Coulthard made his first pit stop. When the pit stops cycled through, he found himself in a fierce battle for the lead with Garth Tander. On cold tires, he ran wide and just barely got a piece of the tire wall but continued. He fell back to third as a result however.

HRT now ran 1-2 as the race approached the 30% mark, which would not change for the rest of the day. As they went for a Saturday cruise, there was some real knock-down drag-out racing behind them. The two Red Bull Holdens ran sixth and seventh late, flanked but their rivals at Ford Performance Racing. The four fought for supremacy in the final five laps and swapped positions before returning to how they were before the battle commenced ironically.

Whincup chipped a little bit more out of Winterbottom's points lead, taking it down to 144 points separating the two. After starting 19th, 'Frosty' was able to muscle his way up through the pack and into eighth place by the time the checkered flag flew. Craig Lowndes remains third in the standings after his crew did a remarkable job to repair his damaged heavily car from the first race. He's 191 points behind Winterbottom and 47 back of his teammate Whincup.

The Safety Car was needed only once during the second 44 lap sprint race, and that was just to clean up some minor debris.