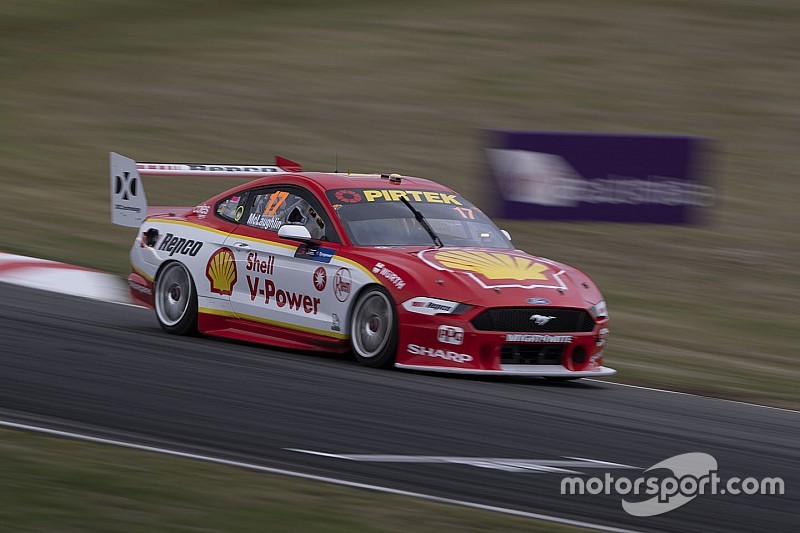 Scott McLaughlin topped the final Supercars practice session at Symmons Plains, while the Tickford Mustangs will all have to go through Q1 after missing out on the Top 10.

It was a frantic start to the session thanks to the threat of rain, the likes of Chaz Mostert and McLaughlin on top early as times quickly dipped into the low 51s.

David Reynolds then jumped to the top with a 50,997s, the first sub-51s lap, at the six-minute mark.

At the midway point of the session Fabian Coulthard went quickest with a 50.909s, as the likes of Jamie Whincup and Saturday polesitter Mark Winterbottom languished outside the Top 10.

With the rain holding off, Shane van Gisbergen lowered the benchmark to a 50.897s with 10 minutes to go.

Three minutes later Reynolds went back to the top with a 50.673s, before Race 1 winner McLaughlin took over with a 50.555s.

That was the final improvement at the top, but there was plenty of action elsewhere as drivers scrambled to get into the Top 10 and book a Q2 berth.

Van Gisbergen and Coulthard both improved late to ensure they'll miss the first part of qualifying, while Winterbottom left his run nice and late, only appearing in the Top 10 inside the final two minutes.

He ended up fourth thanks to a 50.641s on his final lap, followed by Reynolds and James Courtney.

Rick Kelly made a rare appearance in the Top 10 for a Nissan driver this weekend with the seventh quickest time, followed by Scott Pye and Whincup who, like Winterbottom, left his Q2 run late.

Tim Slade was lucky last to book an automatic Q2 spot, shuffling Tickford driver Cam Waters out of the 10 by 0.005s on his final run.

It was a tough session across the board for the Tickford Mustangs, with Mostert 11th, Lee Holdsworth 14th and Will Davison 18th.

Anton De Pasquale, who ended up 22nd, provided one of the most spectacular moments of the session with a high-speed spin on the main straight with a couple of minutes to go.

“It wasn’t too scary; I was more worried that there was a lot of cars coming behind me at the same time,” he said.

“I was sideways a fair was before I got to the grass. I was trying to hold it on, but it is what it is.

“I could of gotten collected by a few cars, but everyone did a good job and we’re all pretty safe.

“It was a bit of a tough session, but we’ve got qualifying now so we’ll see how we go.”