Lowndes switched to a set of fresher used tyres in the final practice session and set second fastest time of the day. 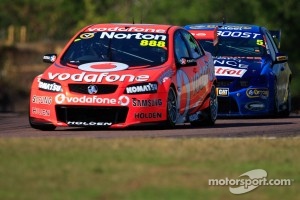 Using one set of used soft tyres throughout the practice 2 and 3, reigning V8 Supercar Champion Whincup had good pace straight out of the box and finished on top of the timesheets for his first on-track session.

Focusing more on setup strategy in the final session, Whincup managed the fifth fastest time and ended fourth overall for the day.

Both of TeamVodafone's endurance co-drivers were at Queensland Raceway for the opening two sessions, with Warren Luff setting the third-fastest time in the first session before improving to second in the second session.

Tomorrow will see the V8 Supercars on track for a 30 minute practice session at 10.10am (AEST) followed by qualifying at 1.25pm (AEST). Race 16 of the V8 Supercar Championship Series will commence at 4.05pm (AEST).