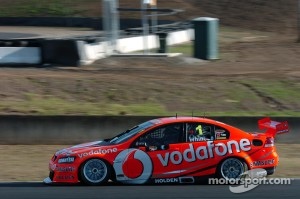 Whincup utilised the entire opening 40-minute practice to work on a race setup for the #1 Commodore and ended the session, second quickest.

With the second practice a co-driver only session, Dumbrell continued to work on race setup and posted the fastest lap before rain fell during the second half of the session.

Dumbrell was back on track for the start of the final 40 minute session but with rain persisting, Whincup took to the track on wet tyres and held strong pace, finishing second and second overall for the day.

Craig Lowndes put the #888 Commodore through its paces during the opening practice session, working on balance and race setup before his co-driver Warren Luff got behind the wheel. The duo finished the session fourth.

Luff got another 18 laps in the co-driver only practice and ended the session sixth.

Ending the day fourth overall, Lowndes and Luff are confident they will make further gains ahead of tomorrows qualifying.