It was a disappointing end to what looked to be a promising day in the TeamVodafone garage, with both Craig Lowndes and Jamie Whincup making driver errors in today's final qualifying race.

Finishing this morning's practice session fourth, Lowndes also set the fourth fastest time in qualifying, only nine one-hundredths of a second off pole. Whincup, who was second in practice suffered an issue with a new set of front brakes during qualifying, achieving a starting position of tenth for co-driver Paul Dumbrell in Qualifying Race 1. 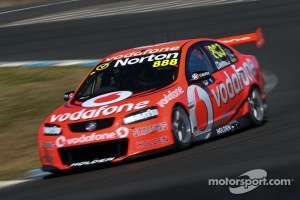 Dumbrell got a strong start off the line and gained five positions by the end of the opening lap. Moving past stablemate Warren Luff and into fourth on Lap 5 the #1 co-driver also claimed Ford drivers Luke Youlden and Dean Canto before finishing second.

After dropping a spot to Dumbrell, Luff maintained fifth for the remainder of the 20 lap race. A pleasing result for both co-drivers.

In the second qualifying race, Whincup took the lead from the start, while Lowndes settled into third position. As the race progressed the defending V8 Supercar champion struggled with brake inconsistencies, locking the rear wheels on the Commodore, running off track and dropping to 23rd position.

Whincup regained four positions and took the chequered flag 19th, which will be his starting position for tomorrow’s 161-lap race.

Lowndes suffered balance issues, causing an off track excursion dropping him to tenth position. He made up ground, finishing the race seventh but gains a spot due to another driver penalty.

Jamie Whincup heads into tomorrow’s 500 km race with a 44 point lead over Mark Winterbottom in the V8 Supercar Championship standings with Craig Lowndes fourth on 2153 points.