Defending V8 Supercar Drivers’ and Teams’ Champion TeamVodafone has launched its 2012 campaign in Sydney, uncovering a bold new livery for the team’s Holden Commodores and revealing a complete roster of endurance drivers.

At the end of the 2011 V8 Supercars Championship, Jamie Whincup joined Craig Lowndes on the record holders’ board as a three-time champion, with the talented duo setting the series benchmark with their historic 1-2 finish.

Today, Whincup and Lowndes announced they were refreshed and ready to take on each other and the rest of the grid in another electrifying year of V8 Supercars action.

Vodafone enters its sixth season as naming rights sponsor of TeamVodafone, which owns the enviable statistic of winning more than a third of the races contested during this period, including wins on every circuit visited during theV8 Supercar season.

The team has an incredible win-rate, having finished champion or runner-up in all five seasons with Vodafone, making it one of the most successful partnerships the sport has ever seen.

When you already have a strong product it's hard to improve it...

Team naming rights sponsor Vodafone is excited to see what the team can achieve again this year.

“As naming rights sponsor you simply can’t get better than a 1-2 finish,” said Stephen Saunders, Head of Sponsorship and Events at Vodafone.

“In 2011, TeamVodafone was the one to watch and we brought customers and fans closer to the V8 action than ever before. 2012 will be no different and with the team going for back-to-back championships it’s set to be a thrilling season.”

“The TeamVodafone Commodores have taken on a dramatic new look for 2012 that will make it easy for fans to spot them anywhere on the track – no matter how fast they are travelling! The customary rocket red has been “metallisized” and is now dominating the scheme with chrome, black and carbon-fibre graphics finishing off the car’s meticulous detail.”

V8 Supercar Champion Whincup expressed his excitement about the prospect of a new season and said he looked forward to the series taking further steps overseas.

“V8 Supercars announced some fantastic developments for the sport last year, I think it's a great thing we are starting a little later and I’m glad the first event has returned to Australia, as it’s great to kick things off on home soil,” said Whincup.

“In saying that, I'm looking forward to heading back to Abu Dhabi for the Formula 1™ race; it’s definitely going to be one of my highlights of the season.”

The 28-year-old said the livery and driver suit updates were an exciting change for the new season.

“When you already have a strong product it's hard to improve it, but I think the commercial team has done a great job this year, the cars look incredible and I can’t wait to get behind the wheel this weekend."

"We are running white suits this year, which I am stoked about. With the in-car temperatures reaching 60 degrees we are always looking for ways to stay as cool as possible and the difference between white and red is actually quite significant.” 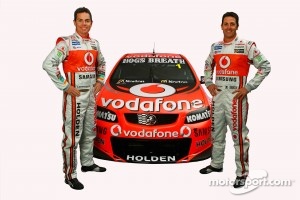 Fan Favourite, Craig Lowndes came excruciatingly close to beating team mate Whincup to the 2011 title and the off-season break has him champing at the bit for another shot at a fourth championship.

“2011 was a great year for TeamVodafone and I certainly gave the Championship my best shot and was proud of my driving achievements throughout the season,” said Lowndes.

Lowndes continues, “I’m confident with the existing Holden Commodores and the TeamVodafone crew that we will now go into the 2012 season with fantastic momentum and then some! Expect to see that rocket red V8 Supercar looking like it’s flying around the track not driving on it.”

TeamVodafone will also enter its third year contesting the championship with Holden. Holden Sponsorship Manager Simon McNamara saying the association had been “nothing short of outstanding.”

“In the two seasons Jamie and Craig have driven TeamVodafone Commodores the team has delivered countless race wins, a Bathurst 1000 victory, and last year’s championship 1-2 in a record-breaking year for Holden,” McNamara said.

“We are extremely proud of our partnership with the team and excited about the season ahead. The change in appearance to the TeamVodafone Commodores is also quite dramatic, and the rocket red ensures they are even more unmistakably Holden.”

With three separate co-driver events playing a pivotal role in the series, TeamVodafone has secured racers it believes will best assist the team to its goal of back-to-back championship wins.

Paul Dumbrell and Warren Luff will join Whincup and Lowndes at the Sandown and Bathurst endurance events, and 2011 Gold Coast 600 race winners Sébastien Bourdais and Richard Lyons are confirmed for the international driver event on the streets of Surfers Paradise. 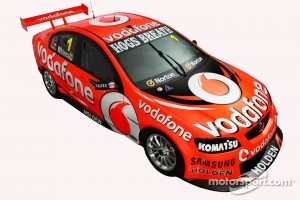 TeamVodafone Team Principal Adrian Burgess said motivation and momentum within the team was at an all-time high, noting the selection of a high-calibre co-driver lineup as a significant coup.

“TeamVodafone enjoyed its most successful year in V8 Supercars in 2011, ending the season with the ultimate scenario of having both drivers in the running for the title, nail biting stuff for us and fantastic for our naming rights sponsor Vodafone,” said Burgess.

“We’ve hit the ground running in 2012 and are well-prepared for the season to start.

“We’re especially pleased to have locked in a quality co-driver lineup for Sandown and Bathurst, and the international race on the Gold Coast.

“Paul (Dumbrell) and Warren (Luff) have extensive experience as full-time V8 Supercar drivers, and we welcome the return of Sébastien Bourdais and Richard Lyons who were both race winners in 2011.”

Fans can see the new TeamVodafone livery on track for the first time at V8 Supercars official pre-season test on Saturday February 11 at Sandown Raceway.

The V8 Supercar Championship Series will open with the Clipsal 500 on the streets of Adelaide from March 1, 2012.