The texts that set up Tander's surprise Triple Eight debut 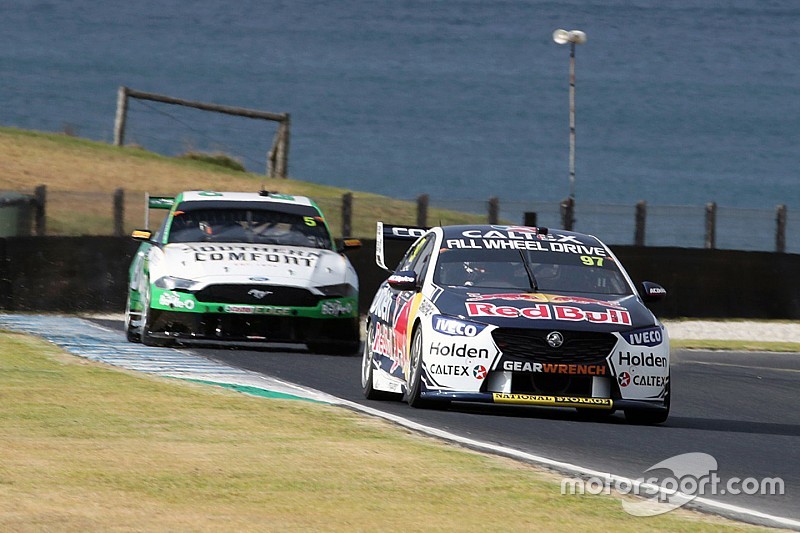 A series of text messages led to Garth Tander's surprise debut in a Triple Eight Holden at the pre-season Supercars test yesterday.

Tander, who signed with T8 as an enduro driver immediately after his shock axing from Garry Rogers Motorsport earlier this year, was on hand for yesterday's pre-season test, marking his public debut in Red Bull Holden colours.

He was even given a handful of laps in Shane van Gisbergen's #97 Commodore, the same car he'll be racing at the long-distance races later this year.

However had it not been for a series of text messages the debut may never have happened.

Tander wasn't originally scheduled to be at Phillip Island, volunteering to join the crew in the garage via a text to team manager Mark Dutton earlier in the week.

"He shot me a text a couple of days ago and said 'would you mind if I pop down [to the test]'," Dutton said.

"We knew it would be a hectic day, so we didn't want to ask him to come down just to sort of stand around for 90 per cent of the day. But when he suggested it, we said 'for sure'."

That led to a second text conversation about Tander keeping a race suit in the back of his road car just in case, which ultimately facilitated his brief stint in the car.

"The original plan is that I wasn't going to be doing laps, and that's fine," explained Tander.

"The plan was just to come down and basically put the headset on and just listen in and learn the garage, I guess.

"And then [on Wednesday] Dutto just texted me and said 'it wouldn't hurt if you just threw your gear in the car. I actually texted me back and said 'mate, any racecar driver worth their salt will always have their gear in the back of the car.'

"So I just brought it down, and there was no guarantee that I would be jumping in the car, which was cool because it was never the plan for me to jump in the car.

"Then Shippy said 'go ahead and get your gear on and we'll give you a few laps' – so that's what we did."

While he only did five laps, Tander said it was enough to get a small insight into why the squad is such a Supercars powerhouse – even on a day when the Red Bull cars were struggling with set-up.

"Everything in the car feels nice," he said.

"For me, it was just making sure I was comfortable with how the brake pedal felt because that's such a big, integral part of how I drive the car.

"So the brake pedal and the brake consistency of the car, the steering weight, all those sorts of things, that's what it was all about for me.

"The car is probably not exactly where they want it to be right now. But, driving the car, you can feel the base of the car is very, very strong. It was good to experience that."

Despite not doing any ergonomic work, Tander said he felt quite comfortable sitting in van Gisbergen's regular seating position.

However what has taken some adjustment is getting used to wearing the colours of a team that's been a long-time rival.

"The amount of people that have told me today that it looks quite weird seeing me get around with a Red Bull shirt on," he said.

"Certainly when I first did the photoshoot and all that, it felt... not normal.

"But now, even just being [at the track], the team has been fantastic, really welcoming. I feel really comfortable in the garage.

"I'm having a few jokes with a few mates up and down pitlane and they're taking the piss out of me, but that's fine.

"Hopefully we have the last laugh in the last quarter of the year."