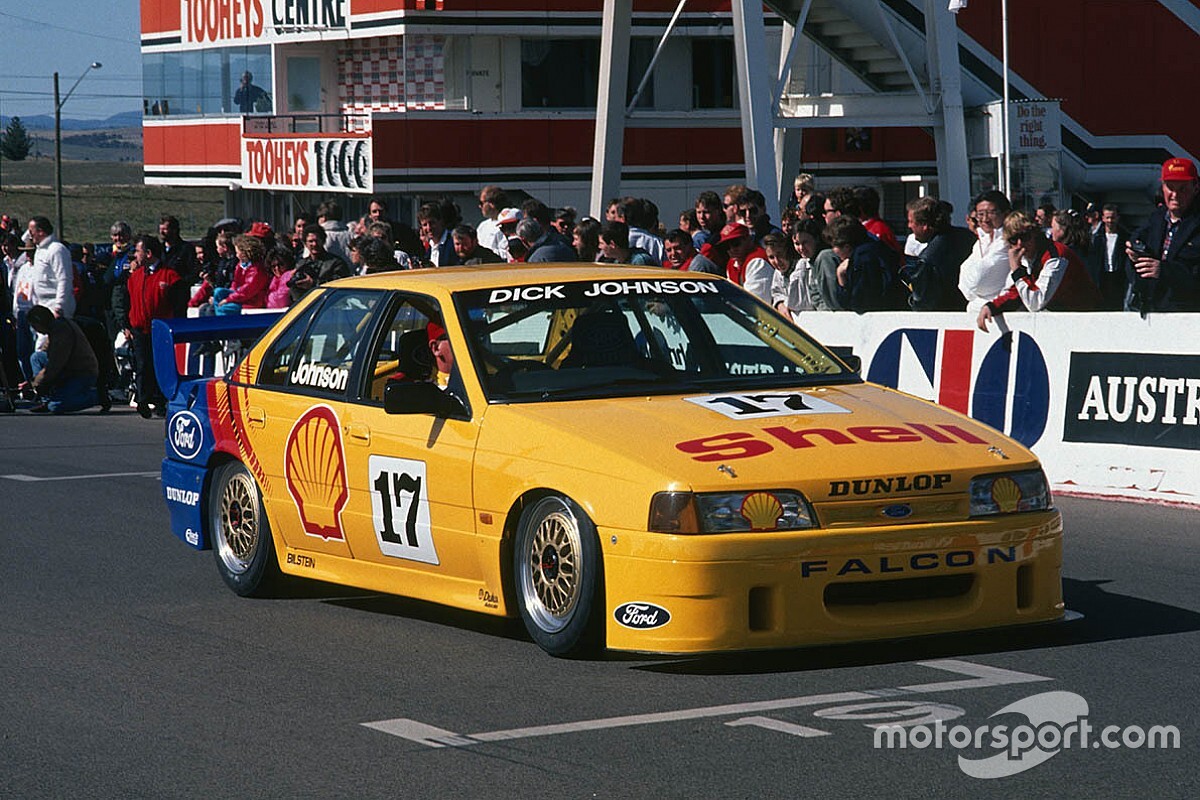 Dick Johnson Racing once built a V8 Falcon touring car that was banned before it could turn a single racing lap.

The famous Ford squad built the illegal Falcon during the 1992 Australian Touring Car Championship season, ahead of the impending move away from the Group A regulations and into the new era of Ford versus Holden.

The full story of DJR EB1 has been told in a recently-released book published by renowned Supercar chassis expert Aaron Noonan, which details each and every car built by DJR and DJR Team Penske so far.

The book labels EB1 the '$300,000 mistake', detailing how the team's first V8 Falcon in almost a decade ended up as little more than an expensive show car and a fascinating bit of trivia.

In anticipation of the new five-litre V8 rules, the team put Neal Lowe in charge of designing and developing an EB Falcon racer during the 1992 season, alongside the Sierra race programme.

The plan was for the new Falcon to debut at that year's Bathurst 1000, the first race that would be open to the new-generation cars.

Lowe's job, however, was complicated by a lack of concrete rules for the five-litre formula.

After much investment, EB1 was unveiled at the final ATCC round at Oran Park in June 1992. That meant technical officials got their first look at the car – and it was swiftly deemed illegal.

The sticking points were the engine being solidly mounted to the chassis and therefore becoming a structural element, and the 'tubbed' wheel wells to make way for wider rubber.

Testing continued despite the setback, DJR driver John Bowe recalling how difficult the transition from the turbo Sierra to the V8 Falcon was.

"You developed a driving style for the Sierras without knowing about it," he explains in the book.

"As you cleared the brake pedal you went full throttle as you were turning into the corner, then by the time you were around the corner the boost was on so you backed off the throttle.

"I got in the Falcon and I've cracked the throttle way too hard and just about shot off the road! It was an eye-opening experience."

The car made just a single public appearance, Johnson driving it at the media day for the Bathurst 1000 in August 1992. His best time was a 2m16.95s, with Bowe setting a 2m13.63s in a DJR Sierra and Glenn Seton a 2m18.37s in his more conservative EB Falcon.

Team manager Ross Stone, who had taken over the DJR Falcon project after Lowe left the team, decided it would be easier to build a legal car ground-up rather than convert EB1 to conform with the rulebook.

"Dick was absolutely filthy on it," adds Bowe. "He'd spent all this money and effort on a car that couldn't race!"

EB1 was used as a show car throughout the life of the E series Falcon in Supercars, with panel conversions to EF and then EL spec.

Years later the car was sold to a club racer in Western Australia, which led to it finally making its racing debut as a sports sedan in 2006.