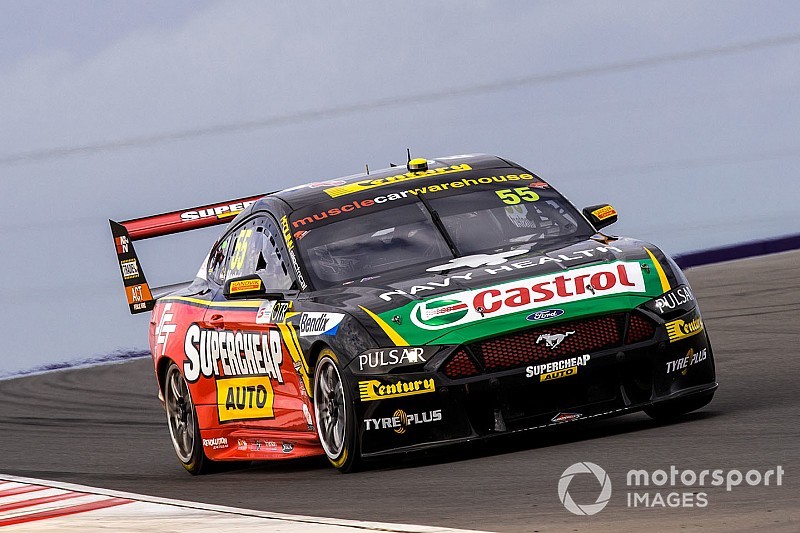 Chaz Mostert pipped Scott McLaughlin by 0.05s in the final Supercars practice session at The Bend.

Early honours went to the Tickford garage, Will Davison and Cam Waters leading the way after the first runs with laps in the late 1m48s bracket.

The 12-minute mark provided a rare moment when a Mustang wasn't fastest, Andre Heimgartner putting his Altima on top with a 1m48.637s.

It was short-lived, though, McLaughlin pulling the best part of seven-tenths clear of the field with a 1m47.950s a minute later.

As the session wore on the Tickford drivers chipped away at the gap, Davison getting to within three-tenths before Mostert and Lee Holdsworth both hung around the two-tenths mark.

With five minutes to go McLaughlin returned for a final run, shifting the benchmark slightly to a 1m47.849s.

But it wasn't quite enough, Mostert shading McLaughlin by 0.05s with his last lap to grab top spot.

“The car feels a bit better than yesterday. It was good to make a few changes and tidy the car up,” said Mostert.

“I was pretty happy with the time, but I think old mate next door might have a little bit more for us, so we’ve got to improve some more.”

Holdsworth ended up third after jumping teammate Waters at the flag, with Fabian Coulthard and Davison next in line to make it an all-Mustang top six.

Heimgartner ended up best of those not driving a Mustang in seventh, just over four-tenths off the pace, followed by David Reynolds, Simona de Silvestro and Anton De Pasquale.

As was the case yesterday, both Triple Eight cars will have to come through all three segments of qualifying.

Jamie Whincup was just 13th quickest, behind both James Golding and Garry Jacobson, while Shane van Gisbergen could only manage 24th.

“We had a big gain yesterday but haven’t really found a gain today at all unfortunately,” said Whincup.

“I’m not sure what to say. It’s more of a fundamental rather than 10 Newtons of spring or a couple of clicks on the bar, it’s something more major than that. I think we’ll go hunting.

“If I was the only car out there I’d say I nailed that lap and the car was pretty good. But you come in and everyone is a second faster. We just don’t have the overall grip.”