The mountain is calling again

The Supercheap Auto Bathurst 1000 launch was hosted in Sydney, Melbourne and Brisbane last night, with drivers, media and sporting personalities, and just about anyone else that could get a ticket to walk the red carpet turning up. The ...

The Supercheap Auto Bathurst 1000 launch was hosted in Sydney, Melbourne and Brisbane last night, with drivers, media and sporting personalities, and just about anyone else that could get a ticket to walk the red carpet turning up. 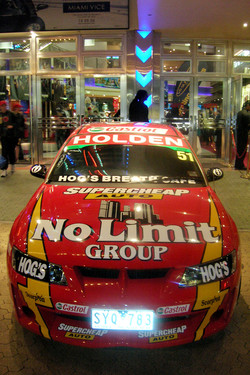 The Supercheap Auto Bathurst 1000 entry to be driven by Greg Murphy and Cameron McConville.
Photo by John Maricic.
Again, as was the case last year, 'the mountain is calling' anthem is being promoted on the big screen throughout Australian movie cinemas, a new campaign aimed at attracting the younger generation to what is known as 'Australia's Great Race, the Bathurst 1000.

V8 Supercars are Australia's fastest growing sport with fan numbers doubling in the past 10 years, reaching records of 1.7 million fans watching the Ford V Holden battles around the country in 2005. The sport is the third most watched behind cricket and Australia Football and coverage extends to 110 countries reaching 850 million homes.

This year will see the Supercheap Auto Bathurst 1000 beaming live coverage to several countries, including the United States of America, the home of NASCAR. If comparisons need to be made, Daytona is to America what Bathurst is to Australia, and the 90 second cinema commercial had one thing in common with NASCAR, the 'Days of Thunder' theme pumping in the background.

Almost every October for as long as I can remember was spent in front of the television watching motoring legends of the likes of Peter Brock, Allan Moffat, Dick Johnson, Kevin Bartlett, John Goss, Alan Grice and Larry Perkins screaming around Mount Panorama, Bathurst, not knowing whether your team was going to win or lose until the chequered flag dropped after 6 hours of thrills, spills, joy and sometimes disappointment.

These days there is a new breed of drivers named 'Skaifey', 'Lowndesy', 'Richo', 'Brighty', 'GT', 'Rusty', 'Murph', 'Bargs' and the Kelly brothers, who the fans come to cheer, and amongst themselves have taken the coveted silverware home on the Monday morning for the past 10 years.

As Garth Tander, who was at the Sydney launch said, 'You don't go to Bathurst to win, you go there to compete, winning is the bonus'. Five time Bathurst winner and defending champion Mark Skaife said, 'There's nowhere that we race that creates the risk and reward as Bathurst. There's no time for deliberation and there is no other race with the same degree of uncertainty'. 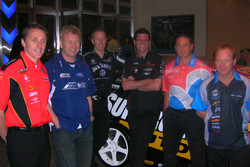 V8 Supercar drivers Cameron McConville, Brad Jones, Steven Richards, Garth Tander, Jose Fernandez and Jason Bargwanna.
Photo by John Maricic.
V8 Supercar Australia Chairman, Mr Tony Cochrane put it, 'We have a unique product that blows people away with the power, the speed, the noise and the excitement', that is the impression that Bathurst leaves, whether you are watching it on the television or you're at the track.

With more and more fans making the pilgrimage to Bathurst each year facilities and amenities have been upgraded to the tune of $24M over the past two years to accommodate the ever increasing interest from the corporate community and the race fans themselves. New public viewing areas, a motor home park, merchandising, catering and a 24 hour convenience store are just some of the significant developments to provide comfort in 2006.

Naming rights sponsor for the second consecutive year is Supercheap Auto, one of Australia's leading automotive parts retailer since the early 70's, with 230 stores across Australia and New Zealand and who's corporate portfolio consists of a two-car team headed by 4 time Bathurst winner, Kiwi Greg Murphy.

Come the 5th of October, 2006, I know where I will be, Bathurst of course, after all, 'the mountain is calling'.