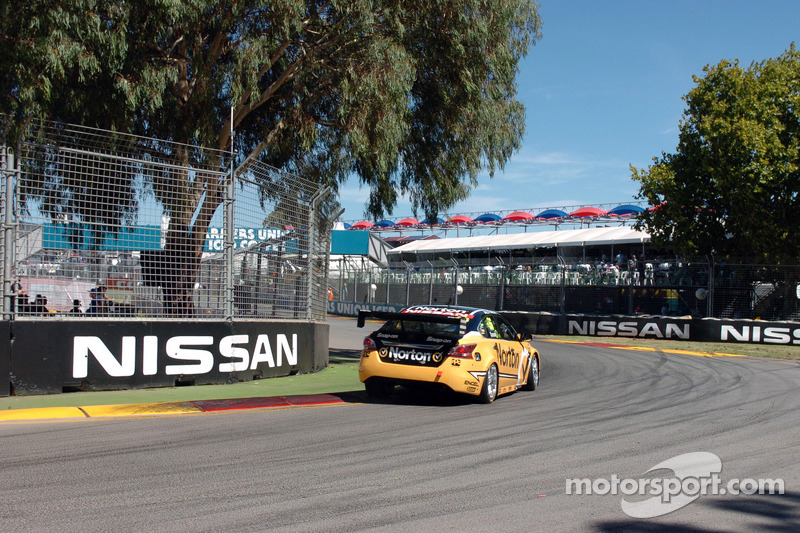 Caruso had to fight from the rear of the field, having qualified down in 24th. The Northern Beaches driver chipped his way through the field to record his fifth top 10 finish of the season for Nissan.

The result makes it eight top 10 results for Caruso from the nine races held around the notorious concrete jungle.

While Caruso was able to run his own race, Rick Kelly was made to do it the hard way. The #15 Jack Daniel’s Altima was hit from behind on the opening lap, giving him a flat right rear tyre.

Kelly kept his head, driving his way through to an eventual 9th and maintaining 14th in the championship order. 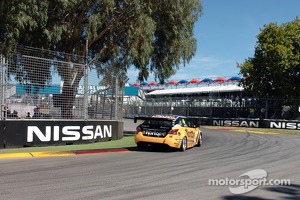 His team-mate and older brother Todd Kelly finished right on his tail in 10th place, moving him up two places in the championship and giving Nissan three of its four drivers inside the top 10.

Norton’s James Moffat was the only driver to miss out on a coveted top 10 placing after a difficult day at the office.

Moffat copped a penalty in qualifying for contact with Alex Premat, which meant he started the 250km race from 23rd.

After making steady inroads, Moffat was forced to serve two drive-through penalties – the first for an unsafe release from his pit bay and the second for an incident with Scott Pye. He finished the race in 20th.

The final race day of the 2013 V8 Supercars Championship will be held at the Sydney track tomorrow, with qualifying at 12.40pm, and the race at 3.05pm.

“It’s absolutely fantastic to end up with seventh here in Sydney,” said Caruso.

“We had the strategy spot on. My engineer got that perfect, and he gave me a better car for the race, so I have to thank him for that.

“I had a bit of a struggle with front brakes. It was an issue for virtually half the race. I had to nurse it quite a bit.

“So to come away with seventh, and with some investigations for cars ahead of us, I reckon we’ve had a really great result.”

"I really enjoyed the race, EP and the team gave me a really good car, we had a couple of solid stops, but I thought our race was over on the first lap when someone hit me and blew the tyre straight away," Rick Kelly said.

"Because of that we had to pit one more time compared to everyone else and it put us almost a lap down. Lucky we got the first safety car, which put us on the back of the pack and we just snuck forward when someone made a mistake.

"The car allowed us to do that, so it's exciting to recover to ninth, but a little disappointing as well, because we had really good car pace in clean air and it would have been good to see where we ended up, so we'll make the most of that tomorrow."

"That's tough going out there, we lost a few spots in the pit stops, but the biggest thing is we survived and it's pretty hard to do that around this joint," Todd Kelly said.

"To have three cars in the top 10 is a good day one. Visibility was terribly out there, if there weren't a couple of decent bumps in the road you wouldn't know where to brake into turn two.

"It was good to survive it ad hopefully we can tune the cars up and do a bit better tomorrow."

“That is a race to forget as I reckon we had a good chance to be with the rest of the Nissans in the top 10,” said James Moffat.

“The car felt pretty good. Qualifying down the back did not help, but I was on the same pace as the leaders and chipping through.

“The first pit-lane penalty was marginal. There was definitely contact, but I thought we’d be OK.

“The second one was totally my fault. I put Scott (Pye) in the fence and I did not mean for that to happen.

“We’ll give it the once over tonight and hit the restart button for tomorrow.”

Bright encouraged by 5th at Sydney