Todd Kelly and David Russell to start 10th in Sandown 500

After asserting themselves as midfield contenders in qualifying, Russell brought the black Altima home in 15th place during his qualifying race.

The #7 Jack Daniel’s Racing Nissan Altima of Todd Kelly and David Russell will start a solid 10th place for the Sandown 500 tomorrow.

After asserting themselves as midfield contenders in qualifying, Russell brought the black Altima home in 15th place during his qualifying race.

Kelly jumped in a dragged the car up to an encouraging 10th place ahead of the 500km event. 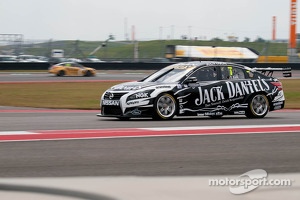 It was a mixed day for the other Nissan Altimas. James Moffat/Taz Douglas will start 20th after Moffat was pushed wide by Shane van Gisbergen, costing the Winton race winner valuable positions.

Rick Kelly/Karl Reindler started the day on the back foot, qualifying 28th. Reindler made up valuable ground in his qualifying race and Rick Kelly got the #15 Jack Daniel’s Altima even further up the field until he locked a brake at Turn 1, spearing into the sand trap.

The Michael Caruso/Daniel Gaunt entry will start in a lowly 24th after an engine problem hampered their Saturday campaign.

With the grid now set, the V8 Supercars return to the track tomorrow morning at 11.05am AEST for a final practice session ahead of the Wilson Security Sandown 500 at 1.35pm.

Todd Kelly – #7 Jack Daniel’s Nissan Altima - (Qualified: 10th): “I didn’t expect to be as high up as 10th. Dave did an awesome job in his qualifying race to maintain 15th and then I was pretty lucky to be in the right place at the right time for once in my race and passed a couple of cars that were battling in front,” said Todd Kelly.

“From there I was just trying to maintain my own position, the car is awesome through the first sector, but it’s very vulnerable up the straights. I drove that whole race watching my mirrors and the car behind had a few looks down the inside from a long way back.

“It’s going to be a tough day tomorrow, but the car is so good in the first sector, so as long as we have two or three car lengths onto the back straight we should be able to hang in there.”

David Russell – #7 Jack Daniel’s Nissan Altima - (Qualified: 10th): “I’m reasonably happy with my race. I got a good start off the line, which pretty much guarantees you a safe couple of opening corners, but all the cars banked up in front and I just had to keep my nose clean,” said David Russell.

“Unfortunately the two spots I gained off the start, I lost down the back straight, but it was a trouble free race for us.

“I focused on consistent laps rather than looking in the mirrors. We just wanted to make sure that we could take advantage of anything that came our way and there was something on the last corner that we benefited from.”

James Moffat – #360 Norton Nissan Altima - (Qualified: 20th): “I got a really bad start in my race. I had a technical issue with the car that didn’t help the start, and then I was lucky to dodge some of carnage,” said James Moffat.

“I was sitting behind Michael (Caruso) and I felt comfortable until (Shane) van Gisbergen tapped me at Dandenong Road and I just got passed by three or four of them. Once I lost that track position, it was all over for me.

“As it is, it’s going to be a long day for us tomorrow, but we’ll sit down and look at some strategies and work out how we can make the most of it.”

Taz Douglas – #360 Norton Nissan Altima - (Qualified: 20th): “We’ve got good pace through the corners. Handling wise, the car is a jet, but down the straights, it feels like we’re fighting with two hands behind our back,” said Taz Douglas.

“I just tried to keep it clean in my race, but I ended up with some front damage due to a concertina accident that I couldn’t avoid. That wasn’t ideal, but there was nothing wrong with the car so I just pressed on.”

Rick Kelly – #15 Jack Daniel’s Nissan Altima - (Qualified: 21st): “Today we’ve been focusing on making the car nice and comfortable and as quick as we can for the race and it’s been a tough one,” said Rick Kelly.

“With the different surfaces all around the track, it’s been hard to land on a set up that’s favourable in the majority of places and at the moment that’s hindering us a little bit.

“It makes it difficult in the race, because there are cars with different paces in different areas. Late in the race I was trying to drive too hard to stay in front of the cars behind and I locked a brake into (turn) one, which put us back into 21st again.

“We just have to learn a lot from the two races, we tried different set ups in the two races today, so we can probably tune it up a bit more for tomorrow.”

Karl Reindler – #15 Jack Daniel’s Nissan Altima - (Qualified: 21st): “I was under very strict instructions to stay out of trouble, I wasn’t allowed to watch the ute race right beforehand, but just kept my nose clean, stayed out of trouble and made up seven positions from where we qualified,” said Karl Reindler.

“It’s positive, but I feel like we still have a bit of work to do with the car at the moment. It’s not a very raceable car as far as strengths and weaknesses go, but we’re going to make a few changes and we’ve got morning warm up and 500km to work it out tomorrow.”

Michael Caruso – #36 Norton Nissan Altima - (Qualified: 24th): “Not a good day unfortunately. We knew we had a good race car, and we moved up a few spots at the start of my race, but I had an intermittent engine problem right from the start,” said Michael Caruso.

“I also got a hit from Rick (Kelly) at the start of the race that forced me into Maro (Engel) and that caused some vibration in the front of the car.

“It was a disappointing result, because despite all the problems, we were actually not looking too bad.

Daniel Gaunt – #36 Norton Nissan Altima - (Qualified: 24th): “I passed a few and picked up a few spots when others ran into some trouble,” said Dan Gaunt.

“It was a pretty simple affair for me. We’ve been chipping away with set-up and I’m starting to feel really good inside the car. The engine in our car was going south in my race, and then obviously even worse for Michael.

“I feel we’re unlucky to not come away with a mid-field start. It’s along race tomorrow, so we’ll try and get everything right and do the best job we can.”

Davison looking for luck at Sandown 500