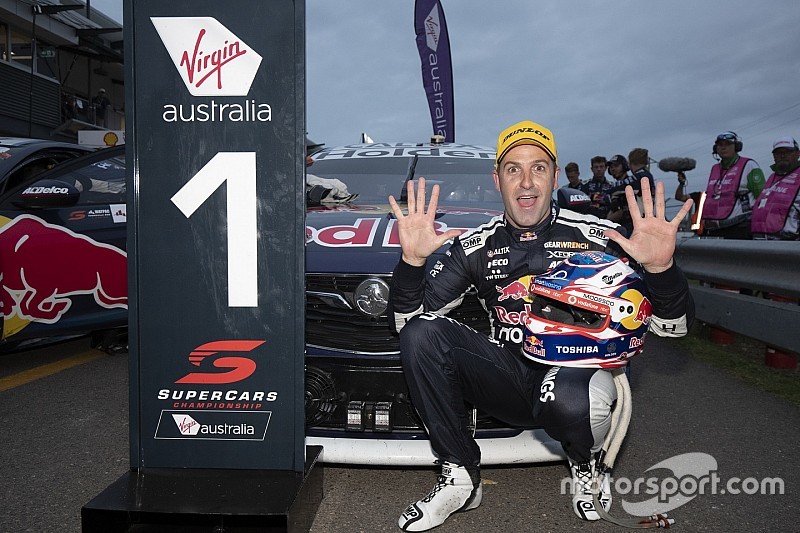 It was an action-packed start to the 200-kay race for Whincup, the Red Bull Holden driver spending most of the first lap fending off David Reynolds to hold onto second, before charging past Scott McLaughlin into Turn 2 on the second lap to snatch the lead.

Once in front Whincup made light work of the chasing pack, his lead over McLaughlin out to just over three seconds within 10 laps, six seconds five laps later, and 10s on Lap 21.

Behind the runaway leader it was McLaughlin and van Gisbergen battling over second spot in the first stint, after Reynolds conceded third to the #97 Red Bull Holden on Lap 10.

The two Kiwis made their first stop together on Lap 21, van Gisbergen managing to sneak out ahead of the Penske Ford. Whincup stopped a lap later, coming back out 11s down the road.

The second stint was a good one for van Gisbergen, who managed to eek out a small buffer over McLaughlin in the 15 laps after the first stops. McLaughlin, meanwhile, spent most of the stint in his mirrors, with Craig Lowndes crowding his rear wing.

On Lap 43 both McLaughlin and Lowndes made their second stop, rejoining in that order. Van Gisbergen then pitted a lap later, coming out directly in front of McLaughlin and then needing to hold off the Penske Ford on its warmer rubber.

Whincup, however, was well clear of that excitement, making his second stop on Lap 47, re-joining with the best part of 15s up his sleeve over the scrap for second.

From there a dominant win seemed inevitable, only for the Safety Car to be called on Lap 55 to allow crews to retrieve debris from the track.

But while it did bring Whincup back to the field, there was no stopping the reigning series champ. Not even a late charge from his teammate after the restart could rattle him, Whincup winning by a comfortable 2.1s.

“I had to remind myself I could still drive," said Whincup, now a 10-time winner on the Far North Queensland circuit.

“But [engineer] David Cauchi gave me an absolute rocket today, it was a lot of fun. We were able to lead from the start and a one-two for the team, I couldn’t be happier.

“I don’t know what it is about Townsville… it’s just a great event and we dig deep and put in our best performance.”

Van Gisbergen was the big winner from the late restart, jumping the lapped Tim Blanchard quicker than McLaughlin to set up a trouble-free run home to second.

McLaughlin came home home third, meaning he dropped as few points as possible to van Gisbergen, while Lowndes had to settle for fourth.

Fabian Coulthard came home fifth, having made his second stop late and therefore had decent tyre condition after the restart. He even went close to running down Lowndes in fourth, closing in on the Triple Eight Holden before dropping back with a handful of laps to go.

Mark Winterbottom was the best of the Tickford Fords in sixth, while Reynolds slipped back to seventh after his pace tailed off mid-way through the first stint.

Cam Waters capped off a decent day for Tickford given the team's recent struggles with eighth, Will Davison finishing ninth in the Tickford-build, 23Red Racing-run Ford and Nick Percat rounding out the Top 10.

While there was little carnage during the race, there was a bizarre incident on the final lap when James Courtney and Jack Le Brocq clashed while scrapping over spots in the back end of the Top 20. Rookie Le Brocq ended up hitting the wall hard, which dumped him to 22nd.

McLaughlin continues to lead the standings with a 152-point gap over van Gisbergen, while the win helped Whincup leapfrog Lowndes, albeit still with a 412-point deficit to the leader.