Triple Eight on Supercars ballast change: "It's a smart decision" 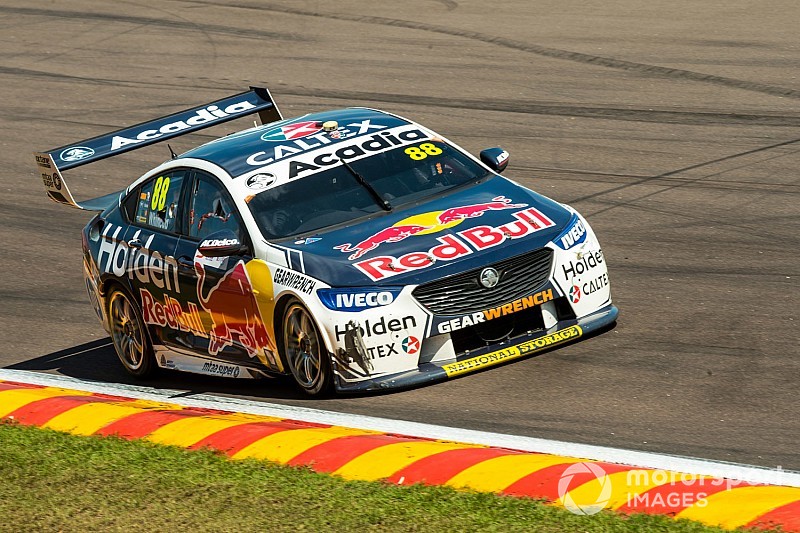 Triple Eight team manager Mark Dutton has praised the Supercars technical department for the latest round of parity-related centre of gravity changes.

A fresh wave of ballast distribution updates were confirmed immediately following last weekend's Townsville round, with all three homologated models set to move weight around ahead of Queensland Raceway.

Ford teams will replace nine of its 28 kilograms of roof-mounted ballast with steel beams in the roof line of the Mustang, the Holden teams can remove the 6.8 kilograms currently fitted to the roof of the Commodore, and Kelly Racing will be able to shift the engine ballast to the sump on the Nissan Altima.

The change won't affect the minimum weight of the cars, only the positioning of the ballast.

According to Dutton, being able to maintain CoG parity while minimising unnecessary weight in the rooflines of the cars is a positive step for the category.

"It's a good thing," he said. "Supercars has taken the opportunity to say, 'well you never want ballast in the roof, so if we let the Nissans drop some of their ballast to lower their [centre of gravity], then the Holdens can remove all of theirs and be equal.

"To remain equal, because we're equal up [in the roofline], if the Nissans drop their CoG height to a lower level, we drop ours to match and the Mustangs drops theirs to match.

"The Mustangs won't lose all of their ballast because it's got so much ballast, but the good thing is the Nissan doesn't have any [in the roof] anyway, and it will bring the Holden down to none, so that's good.

"The most cars out there are Holdens, so it's good to not have ballast in the roof if you don't need it. Then the Fords will reduce the amount [in the roof]. So it's a really smart decision."

The updated ballast mandate follows a second round of CoG testing, which Dutton says has added a new level of confidence in the ruling.

He also expects the ballast shift to have an affect on the handling of the cars, albeit not drastic enough to shake up the competitive order.

"The really good thing is the first test we did was a physical test; you sort of flip the car on its side and try and roll it over," he said.

"The next one, to back all that up, was the actual mathematics. Crunching the numbers, putting all the panel weights in – and they all align, which is full credit to everyone.

"That also gives you the confidence to say 'hang on, we can calculate what it's going to do moving those weights'. And the good thing is [Supercars] spoke to different teams, us included, and said 'what do you think that will do to the handling of the car?'

"It'll do something. Without testing it for sure you don't know how much, but to our best knowledge and simulations, [it] definitely [won't do] enough to outweigh the good of the cars removing the ballast.

"So I think it's a really, really smart move by the category."