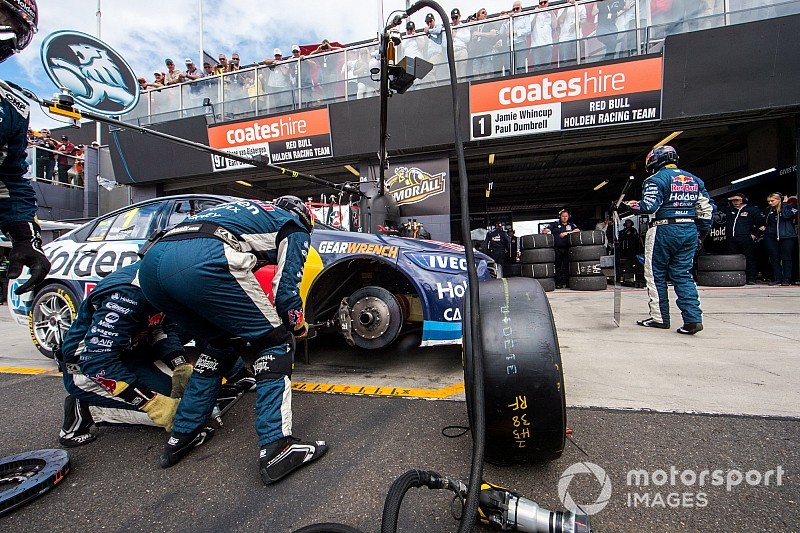 Triple Eight has been hit with a $5000 fine for the pitstop mistake and resulting wheel loss that ruined Jamie Whincup and Paul Dumbrell's Bathurst 1000 chances.

The race-winning team was slapped with the fine by stewards after the right-front wheel on the #1 Red Bull Holden parted ways with the car in spectacular fashion at the start of Lap 45.

The bizarre failure ended what was looking like a promising charge from the Sandown 500 winners, as Whincup and Dumbrell worked to end their long-running Bathurst curse.

According to the stewards report, the team admitted to not tightening the wheel nut during the preceding stop, which directly led to the failure.

As a result it's been fined $5000 and docked 30 teams' championship points.

Following a post-race DRD investigation and an admission by Triple Eight Race Engineering Pty Ltd of a breach of Rule A4.4 (Each Competitor is responsible for all safety aspects of the team including that competitor’s car, namely the team admitted it failed to adequately tighten the wheel on Car #1 at its pitstop before the wheel departed the car on Lap 38) the Stewards imposed the penalty of a fine of $5000 and the loss of 30 Teams' Championship points on Triple Eight Race Engineering Pty Ltd," read the stewards report.

The failure happened shortly after the second round of stops, which came under Safety Car right as the two Red Bull cars were running second and third.

That meant Earl Bamber was stacked behind Dumbrell for the stop, something team boss Roland Dane says could influenced the unfortunate outcome for the #1.

"The wheel nut came off," he confirmed.

"Why it came off I'm not 100 per cent sure, whether it was a wheel clip failure, but at the end of the day it came off probably because it wasn't tightened for some reason.

"The stop involved was a stacking stop, so the pressure on the guys to perform, get the car out of the way, get the tyre ready for the next car sort of thing, probably meant that maybe the wheel didn't get tightened.

"It's hard to know 100 per cent after the event, but there's a high chance that's what it was."

Whincup and Dumbrell dropping out of the race ultimately helped pave the way for another Triple Eight pair, veterans Craig Lowndes and Steve Richards, to claim a fairytale win.

Reynolds on Bathurst heartbreak: 'My body gave up'