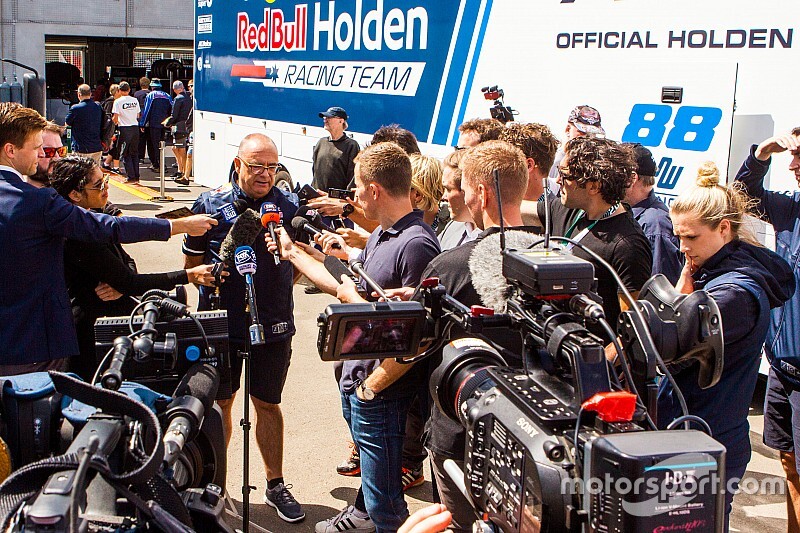 Roland Dane won't speculate about which make of car his factory Holden squad will run for the 2021 Supercars season.

The Aussie series was rocked by yesterday's news that GM will shut down the Holden brand at the end of 2020, leaving a question mark over the future of the 16 Commodores in the 24-car field.

While the road-going Commodore was already on its way out of Holden showrooms, the brand had committed to both the body shape in racing spec, as well as its factory commitment with Triple Eight, until the end of 2021.

However there are already signs that the Holden funding won't run its course.

The issue is further complicated by the new technical regulations that are due to be introduced for 2022. That was meant to align with the current Holden/GM and Ford deals, offering an easy transition into new or updated hardware.

However there's now an awkward gap year, for which heavy investment in a new car under under the current regulations seems unlikely.

One option is that the Holden teams will continue to field the Commodore during the 2021 season, with Triple Eight reverting to non-factory status should its deal be cut short.

However Dane won't be drawn on his team's 2021 plans just yet, the T8 owner staying tight-lipped when asked if he expects to be running Commodores beyond the current season.

"I don't want to speculate on what we're doing next season at the moment," he said.

"The ongoing situation is that I'm meeting with GM this week and we'll discuss what happens. Until then, there's nothing more to be said."

Dane did, however, confirm that the Commodore will be eligible to race next season, even if it won't be a "prominent brand".

"The homologation from Supercars will be valid for several more years, as it always is," he said.

"If you remember with the [Ford] Falcon, even after they stopped production of the car and its availability to the public it carried on racing for several years."

While there has been some pessimistic reaction to the Holden news, Dane remains confident that, with new rules looming, the category can adapt.

When asked if losing Holden will drive fans away, Dane said: "Not if we, collectively, as the category, do our homework properly.

"I think that we can still provide the excitement and the show that people have come to expect over many years.

"Unfortunately one of the issues is that many of the people that have been barracking for the Holden brand over the last 10 years or so haven't actually been buying the product, for whatever reason. It's a fact of life that people have been turning up to watch the races in other brands.

"It's something we're all aware of. Times change, and we have to change with them."

As part of yesterday's announcement there were hints that a 'GM Special Vehicles' division will continue to import GM products to Australia, which leaves the door ajar for a factory Camaro or Corvette programme under the new regulations.

The Camaro is already indirectly linked to Supercars, with the Walkinshaw Group charged by GM with converting the car to right-hand-drive for the local market.

Walkinshaw Andretti United did evaluate a potential Camaro programme in 2018, but opted to shelve the project until the category adopts a more suitable control chassis.