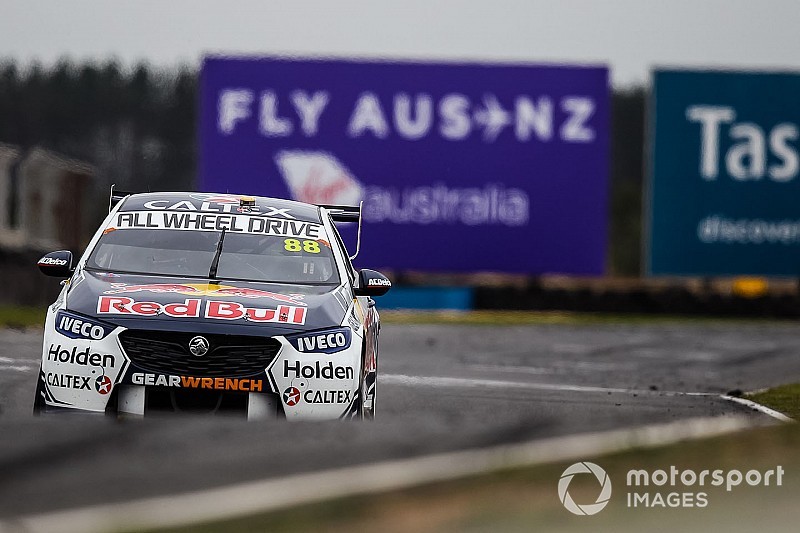 Triple Eight is servicing its factory Holdens in Tasmania today before travelling directly to Phillip Island tomorrow ahead of the second leg of the Supercars double header.

The Queensland-based team has kept the majority of its staff in Australia's south-east this week, with the tight turnaround between the Symmons Plains and Phillip Island rounds making a return to Queensland impossible.

The crew have been busy preparing the cars at the Symmons Plains track last night and today before the trucks hit the boat tomorrow.

The crew will fly from Launceston to Melbourne tomorrow afternoon and then head straight to Phillip Island ahead of this weekend's round.

According to T8 team manager Mark Dutton there were discussions about including a stop over in Melbourne to enjoy the nightlife in between, however the team decided to put on its "captain sensible pants" and head straight to Phillip Island, two hours south-east of the city.

"Drivers, commercial, things like that [traveled back to Queensland], but none of the crew," explained Dutton on Sunday evening.

"We'll be back here [at Symmons Plains] prepping them and the cars leave here Tuesday morning, in the trucks.

"We'll fly Tuesday afternoon to Melbourne and head straight out to Phillip Island.

"We weighed up do we stay in Melbourne on Tuesday night where there is a few more watering holes, but we didn't do that. We had to put on our captain sensible pants instead of the fun ones.

"We'll be out at Phillip Island Tuesday night. We'll chill, have a bit of a sleep in. The trucks are allowed to cross over into Phillip Island about 1pm Wednesday, and we'll do final prep then. "

DJR Team Penske was set to do the same, with its crew preparing its Mustangs at Symmons Plains today before heading to the mainland on the boat tomorrow.

Like T8, the DJRTP crew is set to head straight to Phillip Island tomorrow afternoon.

Melbourne-based teams such as Walkinshaw Andretti United, Tickford Racing and Erebus Motorsport sent staff back home last night, with cars and trucks set to arrive back at the factory later today or tomorrow morning.

Brad Jones Racing, which is located on the Victorian/New South Wales border, is running a hybrid travel plan. Like the Queensland-based teams, its Holdens will be prepped at Symmons Plains today, before the crew travels home to Albury late tomorrow.

The cars won't follow suit, however, with the trucks set to go straight from the ferry port in Melbourne to Phillip Island.

The crew will then leave Albury at 6am on Wednesday morning for both set-up and a Super3 test day at Phillip Island.

Track action kicks off at PI on Friday morning.

'Spraying it' in qualifying set up McLaughlin's quiet race