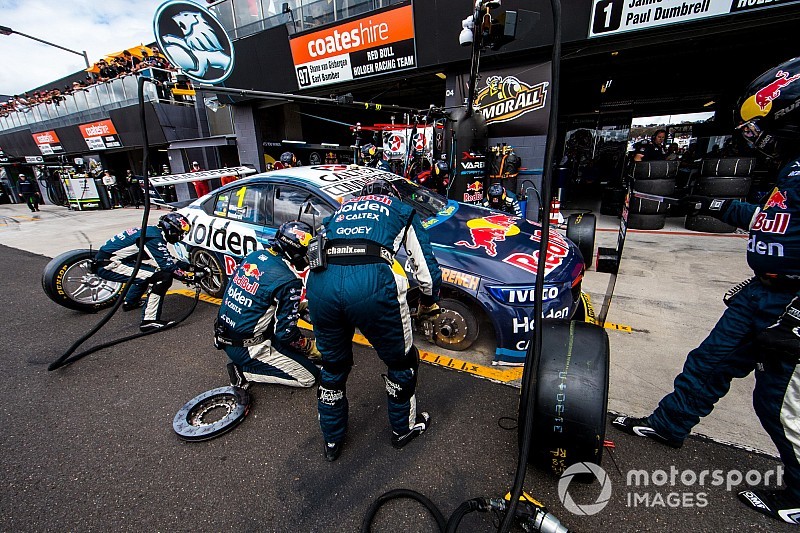 Triple Eight will debut a new wheel retention system at the next Supercars round, as a direct response to costly incidents at Bathurst last year and Albert Park last weekend.

Since its high-profile rogue wheel drama during last year's Bathurst 1000, which cost Jamie Whincup and Paul Dumbrell a clear shot at victory, the factory Holden team has been working on a new wheel clip system.

The idea is that it will keep a rim on the car even if the centre nut isn't completely tight, with lost wheels not only detrimental in terms of results, but generally punished with fines and points penalties.

Triple Eight had intended to debut it at Albert Park last weekend, however issues during pitstop practice meant it was shelved at the last minute.

That proved to be a costly decision, with Shane van Gisbergen's right rear wheel departed his Commodore several laps after his pitstop during Saturday's evening race.

The Kiwi finished the race 21st after two unscheduled stops, while T8 was hit with a $5000 fine and stripped of 30 teams' championship points.

The new wheel clips are now set to be modified and fitted before the series hits Symmons Plains in Tasmania early next month.

"We're reviewing – we have been, funnily enough, since Bathurst – a safety mechanism for locks as a back-up so the wheel doesn't actually part company," confirmed T8 team manager Mark Dutton.

"We had intended to introduce a new system for [the Albert Park] weekend, there's the irony for you. It didn't quite do the job as we intended it to, so we didn't race with it. And it bit us.

"So we will definitely have different wheel clips for Tassie, so that if there is any sort of issue they will make sure the wheel becomes a bit of a wobble and stays on the car."

Elaborating on the decision to leave the new clips off the car for Albert Park, Dutton said they didn't even get a run in the practice sessions after not performing as expected during pitstop rehearsals.

"We were going to do it for pitstop practice, but we weren't happy with them, so we didn't even practice with them," he said.

"They're sitting in the truck. The full intention was for them to work perfectly in pitstop practice and then roll them out. It didn't happen.

"That's life. With developments unfortunately you don't nail it every time. But we do have a quick fix that we can do for Tassie, which we'll definitely do.

"It's one of those things, it's bitten us twice now, that's two times too many. It's not going to happen for the same reason for a third time, that's for sure."