The pressure intensified this afternoon with just a single forty minute qualifying session to determine the grid and which drivers would compete in tomorrow’s top ten shootout, for Australia’s greatest race. 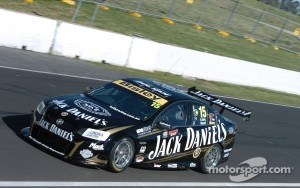 This caused not only considerable damage to the front left side of his car, but also a red flag, halting the session. Tander was to return later and grab a top ten qualifying spot. Once the session resumed, both Jack Daniel's Racing cars were in the top ten with Rick second fastest and Todd fourth.

As the session progressed and the track continued to change the Jack Daniel's Racing drivers cycled through several sets of new tyres as they continued to post competitive lap times.

Once again both Rick and Todd improved their times in this session posting personal bests for the weekend. Rick’s time was just .67 sec. off fastest qualifier Jamie Whincup and gave him the 13th starting position while Todd finished the session 19th for Sunday’s Supercheap Auto Bathurst 1,000.

Qualifying was very tight with the entire 29 car field separated by just 2.7 seconds.

Rick Kelly - “I’m relieved that qualifying is over but I’m also frustrated that that we didn’t make it into the ten, as I thought there was the potential in the car for us to achieve that.

The second last run for me was a really good confident one and it took us to fifth fastest. Then we put the last set of tyres on and the potential again was pretty good, I was about a tenth slower in the first sector and then I got held up over the top, which meant the whole run down the hill was compromised and I was a tenth slower than my fastest lap.

There was two tenths in the car which would have snuck us into the top ten. Although I was disappointed, it was a great improvement to the car overnight and there is still some improving to do for the race”.

Todd Kelly – “Although we made some improvements, nineteenth is not where we want to be with the car and I’m really fighting it over the top with a fair bit of oversteer across the top and down the hill. If we could have tidied that up, it would have resulted in a good improvement in lap times”.


Rick and Todd Kelly started the final 45-minute practice session before qualifying and no sooner had all the cars ventured onto the track than, the red flags were waving after Tony D’Alberto went off the road at McPhillamy Park. He was able to drive back to the pits and the session resumed some five minutes later.

With the drivers pushing the limits, the red flag waved again after Tim Slade ‘bunkered’ his Falcon in the Murray’s corner gravel trap. Tim’s car required a tilt-tray ride, but he soon returned to the track.

Rick and Todd continued to chase a competitive set up as the track had changed conditions once again, including a strong head wind on Conrod straight.

Both Jack Daniel's Racing drivers posted their fastest laps of the weekend to date and ended the session with Rick 15th and Todd 26th.

In near perfect conditions, the co-drivers had their final ‘exclusive’ session for the Supercheap Auto Bathurst 1,000 this morning and Jack Daniel's Racing’s Tim Blanchard and David Russell spent the session clocking up more track time, getting more comfortable with the cars each lap.

Russell lapped the Mt Panorama circuit in similar times to yesterday and finished the session 23rd fastest, while Blanchard improved his times from yesterday and stopped the clocks 25th fastest.