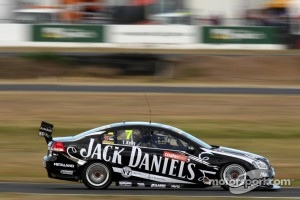 Jack Daniel’s Racing enters the 2011 V8 Supercars ‘season of endurance’ at its strongest circuit, the Phillip Island Grand Prix Circuit, at the L&H 500 in Victoria this weekend.

Rick Kelly, currently fourth in the 2011 V8 Supercars Championship points standings, believes that the continuity of having Owen Kelly join him aboard the #15 Jack Daniel’s Commodore for a second consecutive year will help his chances for victory.

Meanwhile Rick’s brother and Jack Daniel’s Racing team-mate Todd Kelly, a previous event winner at Phillip Island, is putting major emphasis on the endurance events, where he will be joined by David Russell in the #7 Jack Daniel’s Commodore.

Russell currently sits in second place in the second-tier Fujitsu V8 Supercars Series points standings and is regarded as one of the strongest co-drivers in the field given his form this year and regular seat-time in V8 Supercars this season.

“The Jack Daniel's Commodores work well at Phillip Island and Rick and I both really enjoy the track,” said Todd Kelly.

“It’s a really good high-speed track with plenty of fourth and fifth gear corners. To get the most out of a lap around there compared to say Winton it’s very different.

“It’s about being very precise and spot on with the car at a slow track like Winton, but at Phillip Island at high speed places like The Hayshed and Lukey Heights it’s about being precise but also being brave, and that’s the sort of place where Rick and I really enjoy driving these cars.

“Based on past experiences at Phillip Island I’m really looking forward to getting there.

“We’ve put in a huge amount of work preparing for it with not only our cars but also with myself and Dave Russell my co-driver.

“We’ve all done a huge amount of work with training camps for all the drivers and other bits and pieces to make sure we are more prepared with anyone else when we get there.

“At this point we really couldn’t have done anything else. It’s all shaping up well and we are as prepared as we possibly can be. I just can’t wait to get there and give it everything we’ve got.”

“It’s fast and always fun to drive, even when your car is not quite ideal you can still really enjoy that track, where as some other tracks when the car is not much chop it’s not fun at all. Queensland Raceway is a good example of that and even places like Winton as well.

“We definitely love Phillip Island and it’s great for us to head to the endurance races now and share my Jack Daniel’s Commodore with Owen Kelly.

“Obviously we’ve had a pretty reasonable start to the year, even though the consistency hasn’t been ideal, the two endurance races are a good chance for us to grab some points and try to move closer to third place in the championship.

“At the same time we are obviously quite aware that it could go the other way and we could lose points and drop back considerably, especially given that the bulk of the points are allocated to the Sunday race at Phillip Island. So if you don't finish that race you will be in a bad way points-wise.

“For me I’ve never won a 500, the first enduro leading up to Bathurst, and that’s something that’s clearly in my head that I want to do and want to achieve. I think this year is a great opportunity for us to do it.

“We’ve had Owen (Kelly) with us for over a year now so we work very well together and know each other really well. The seating position and car set-up is ideal for both of us so we are in good shape.

“If our Jack Daniel’s Commodore is as good as it was at Phillip Island last year we are definitely in as good a shape as anyone to win that race. But we could turn up and the changes that we have made to our cars from last year to this year might not suit this circuit and it might take us a little but longer to get a handle on things. Who knows?

“So we are definitely not rolling into this event with our chests out thinking we are going to win it. We know we've got work to do still but if we do everything really well this weekend and everyone does a great job within the team, the drivers do a good job and luck goes our way we can definitely win it. But we need to get there and do all the hard work required first.”

Jack Daniel’s Racing will help celebrate the birthday of Mr Jack Daniel at the first endurance event of the 2011 V8 Supercars Championship, the L&H 500 at the Phillip Island Grand Prix Circuit in Victoria, on September 16-18.

Both Jack Daniel’s Commodores will carry special ‘Jacktember’ bonnets at Phillip Island this weekend, commemorating the birthday of the man behind the ‘Old No 7’ Tennessee whiskey.

‘Jacktember’ celebrates the birthday of Mr Jasper Newton Daniel, affectionately known as Jack. This year, friends of Jack all around the world are celebrating his 161st birthday – the same amount of laps as the Supercheap Auto Bathurst 1000.

Jack was a fiercely independent individual throughout his life, leaving home at a very young age. Independence is a trait that Jack shares with Todd and Rick Kelly, who started their own four-car V8 Supercar team in 2009.

Having left home before he was even 10 years old, the exact date of Jack’s birth is a mystery. So his birthday is celebrated for an entire month each September – Jacktember.

“Racing drivers are notorious for lying about their age and it seems that old Jack might have also enjoyed keeping his real age a mystery,” said Todd Kelly, driver of the #7 Jack Daniel’s Commodore.

“We love all the stories behind the Jack Daniel’s brand and Jack’s birthday is one of our favourites.

“Jack Daniel’s Racing is pleased to help celebrate Jacktember at Phillip Island, even if we are not quite sure on the exact age of Mr Jack.”

Rick Kelly, currently fourth in the 2011 V8 Supercars Championship points standings aboard the #15 Jack Daniel’s Commodore, said that last year’s trip to Lynchburg made he and his brother further appreciate the rich history of the Jack Daniel’s brand.

“The trip to Lynchburg last year was amazing and the birthday mystery is just one of so many stories behind the Jack Daniel’s brand,” said Rick Kelly.

“I think the Jacktember bonnets will look really cool on our Jack Daniel’s Commodores at Phillip Island this weekend.

“As friends of Mr Jack we are happy to be among the many people right around the world celebrating Jack’s birthday this September.”

It’s an extra-special month of celebrations for Jack Daniel’s, with a new, sharper Old No 7 label and bottle launched in Australia this month.

Fans can enter a competition to win a trip to the Jack Daniel’s distillery in Lynchburg, Tennessee in the United States via the Jacktember Facebook app at facebook.com/JackDanielsAustralia