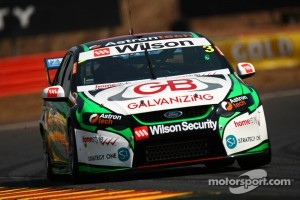 Phillip Island is known best for its picturesque views and holiday atmosphere.

The famous Island's tranquility will be broken this weekend when the V8 Supercars 'Season of Endurance' gets underway for the L&H 500 Phillip Island.

While the roar of 28 V8 Supercars will be enough to scare the wits out of the Island's penguin habitats, Wilson Security Racing is taking a cool and calm approach to the meeting.

After a month's break between the last event at Queensland Raceway, regular #3 star Tony D'Alberto will be joined by his endurance driver partner Dale Wood, driving the Ford Performance Racing-built Ford Falcon FG.

The pair, working together for the first time , have formed a strong working relationship and hope to maximise that at Phillip Island this weekend.

Both D'Alberto and Wood are yet to notch up a top 10 result in any 500km V8 endurance race, with D'Alberto's best 11th (at Sandown in 2007), while Wood's best was 14th (at Phillip Island with Todd Kelly last year).

"It feels like a long time has passed since we last raced, so it's exciting to get back into race mode," said Tony D'Alberto.

"What's even more exciting is that we're heading into the biggest races of the year, and there's no reason why we shouldn't have a good shot this weekend at Phillip Island.

"We are the first to acknowledge that we've struggled with the soft compound tyre this year, but at Phillip island and Bathurst, we're back on the hard tyres. I know our team, and everyone at FPR, is working day and night to fix the soft tyre problem, but it's good to know that our hard tyre pace is strong and that we'll be competitive at Phillip Island and Bathurst.

"If you look at last year's form, FPR was very fast there. Frosty (Mark Winterbottom) finished on the podium, and I know they want to go back there and go even better.

"We want to have a strong weekend as well. Our team has been working very hard, digging deep to improve all the facets within, and I know we're in a good position.

"Dale has worked out very well for us this year. He is new to our team as a co-driver, but he has fit in perfectly. He was competitive at Phillip Island with the Jack Daniel's boys last year and has been very good for us in all the testing we've done."

"The team has been extremely good to me in the lead up to these race – I'm looking forward to repaying their loyaty," said Dale Wood.

"They have given me plenty of the miles in the car during the practice and test days, so I don't feel like I'm going into these races rusty. I feel good about them.

"I don't want to put any expectations on my performance or a result that we want. Obviously, top five would be fantastic, and everyone says 'we want to be in the top 10.' All we can do is try and make everything run like clockwork and where we end up is hopefully the result we deserve."

"We've had a good break since the last event at Queensland Raceway. The boys are refreshed and we've got a good feeling amongst the group.

"Returning to the hard tyre, we know the pace will be there. It will be just a matter of capitalising on the opportunities we get and hopefully we'll be near the pointy end on Sunday afternoon."