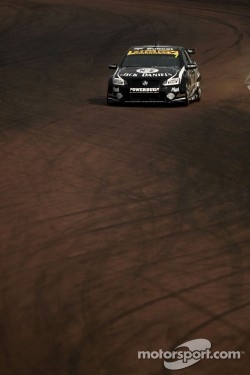 Russell made a strong team debut on Friday's opening practice, running in the top ten throughout, setting the 8th fastest lap time. Russell and the team's engineers found more speed for Saturday's final practice session, ranking him 7th fastest. After making some changes for qualifying that didn't work as planned, Russell qualified 18th and finished 20th in his 14 lap qualifying race, which included a compulsory pit stop. This result combined with Todd Kelly's qualifying race result of 9th earned the Kelly Racing duo the 11th spot on the grid for the L & H 500.

An aborted race start created some early tension with Russell behind the wheel for the start. HRT driver Nick Percat stalled his Commodore from the second spot on the grid, which made the field complete two warm up laps before getting the 113 lap race underway at 1.40pm in clear and sunny conditions.

The team elected to give Russell the responsibility of starting the race and he powered from 11th on the grid to 7th position by the first corner. The opening laps saw close racing with Russell engaging in an early battle with FPR driver Steve Richards and Kelly Racing team mate Owen Kelly. By lap 10 Russell had shuffled into 10th position until making his first pit stop for fuel and tyres on lap 18. Rejoining the race in 22nd position, by lap 32 he had powered his way back into the top ten and raced as high as 8th, handing the car to Todd Kelly on his second pit stop on lap 45. Kelly took over for the remainder of the race, maintaining a consistent pace despite braking and tyre wear issues with to finish 14th. The race was won by Craig Lowndes and Mark Skaife (Team Vodafone Commodore) with their team mates Jamie Whincup and Andrew Thompson finishing second and Ford Performance Racing drivers Will Davison and Luke Youlden completing the top three.

According to Todd Kelly, “It was a bloody hard day out there today. The fact was that we just didn't have a fast enough car and instead of attacking we were covering and in defence-mode the whole race. It was just way too hard on its tyres. It really cooked the rear tyres especially during the race and then it makes you weak everywhere, cornering and especially under braking. We just had no pace towards the end there and got cleaned up by the guys who pitted later and had fresher tyres, so there absolutely is nothing you can do about that."

"We had high hopes for this weekend,” stated David Russell. “Todd and I were really looking at a top five today for the #7 Jack Daniel’s Commodore - that was our goal. I had brake and traction issues that progressively became worse during my stints behind the wheel. I had some close battles and in some cases it was better to pull out of a potential incident to make sure I handed Todd a straight car by the end of the race. We gained a solid result and personally I've learned a lot about the car today. The team did a great job throughout and Todd had a great stint in the last half of the race. Towards the end of the final stint the tyres were going away and he was just hanging on. He did a good job to keep it in in the top 15.”

Russell will re-join Jack Daniel's Racing for one of Australia's greatest sporting events, the Supercheap Auto Bathurst 1000 from October 6 to 9. He will be performing double duties at this event as he will also be defending his Fujitsu V8 Supercar Series pole position and double race victories gained last year at Mount Panorama in his Team Jayco Falcon. The 29 year old Brisbane based racer is currently placed second in the 2011 Fujitsu V8 Supercar Series with three rounds remianing at Bathurst, Sandown and Homebush (Sydney Olympic Park).