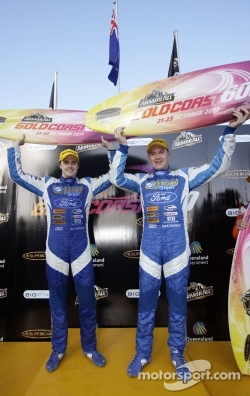 Mark Winterbottom and Irish international co-driver, Richard Lyons have tapped into the ‘Luck of the Irish’ to win on the final day of the 2011 Armor All Gold Coast 600.

After suffering on the soft tyre compound for the most of the year, yesterday’s podium and today’s race win was a welcome improvement for Winterbottom.

“Winning is fantastic, but doing it on soft tyres is that little bit sweeter,” said Winterbottom.

“We haven't had the best run on that tyre and the guys have worked incredibly hard, to see them from the podium and to see the smiles on their faces - that's a lot of hours in the workshop and they really deserved it.”

Irish teammate Lyons was a last minute replacement for IndyCar driver Will Power who was forced to pull out of the Gold Coast event in the wake of the Las Vegas IndyCar crash which claimed the life of Dan Wheldon.

“I just can't believe how my week has turned around, it's happened so fast. It's been a great opportunity with FPR; it's a team I've always wanted to work with for so long, so I'm really enjoying the moment with the guys,” said Lyons.

Second-placed Whincup and Bourdais also took home a substantial prize by winning the Armor All ‘Super Pole Challenge’ seeing them win a $10,000 bonus for taking the $5,000 Armor All Pole Awards in both races across the weekend.

Closing out the podium today was Lee Holdsworth and Le Mans international driver Simon Pagenaud, with Pagenaud declaring the Gold Coast circuit and show as the best in the world.

“It's a great venue, Surfers Paradise - for me - is the best street circuit in the world and the best show in the world, I really enjoyed being part of it,” said Pagenaud.

“I've been a rookie here this year, hopefully I get to come back here in the future.”

Bourdais’ weekend was made extra-special when he claimed the inaugural Dan Wheldon Memorial Trophy, with the Frenchman emotionally describing it as the “toughest trophy to receive”.

The trophy, dedicated to the late IndyCar driver Dan Wheldon who died tragically last week, is awarded to the best international driver for the Gold Coast event based on accumulative points.

Event organisers have been pleased with crowd numbers for this year’s event, with the final tally revealing a total of 181,186 visitors for the three day, two night event – an increase of more than 11,000 guests compared to the 2010 event.

Saturday - which also included the ‘rock’ element of a Simple Minds headlined 600 Sounds concert, presented by Sea FM - drew in the most attendees with 63,502 spectators coming through the gates. Friday and Sunday hosted 57,903 and 60,081 race fans respectively.

At the close of today’s festivities, V8 Supercars Chairman Tony Cochrane thanked the Queensland for their support and promised to make the 2012 event even better.

“Thanks needs to go to the Queensland government to make the bold decision a couple of years ago to stick with us - I think it has definitely paid off,” said Cochrane.

“We said it was a three to four year exercise to get this event back to it's glory days. We've learnt a lot again from this weekend and we'll debrief over the coming weeks and we'll move it forward to another pace again next year.”

Queensland Sport Minister Phil Reeves was enthusiastic to see the success of the 2011 event, and for Queensland to be able to demonstrate its world-class event hosting status.

“This event has become unique in being appealing to people from all walks of life. It brings kids, families, fans and fun loving individuals together to experience the best Queensland has to offer,” said Minister Reeves.

“When it comes to staging world-class events the Bligh Government knows how to do business!”

The three days of the Armor All Gold Coast 600 was a festival of entertainment, with everything from rock bands, stunt-riding motorcycles and international stars, to home grown history, V8 Utes, open-wheeled Formula Ford action and the high-style of the Porsche Carrera Cup.

Rock music fans turned out in droves to see legendary Scottish band Simple Minds in their only Australian concert at the 600 Sounds stage at the Broadwater Parklands precinct last night.

Australian bands Eskimo Joe, Masters Apprentices and the Hoodoo Gurus warmed up the crowd before the international headliners wowed the stoic crowd, bringing the curtain down on the 600 Sounds festival.

The Armor All Gold Coast 600 support categories also took to the circuit to keep the race fans entertained during the three days.

Craig Baird made a clean sweep of the Gold Coast Porsche Carrera Cup round, winning both of the two Carrera Cup races run today, after winning race one yesterday.

The second and third steps of the Porsche Carrera Cup podium saw Daniel Gaunt (2nd Race 2, 3rd Race 3), Ben Barker (3rd Race 2) and Steven Richards (2nd Race 3) fight it out, while Michael Patrizi and Johnny Reid experienced an unfortunate end to their race when a tight squeeze into turn 13 during race two saw them come to a complete halt with Reid’s car resting on top of Patrizi’s car.

Ryal Harris joined Baird in the clean sweep stakes by taking wins in all three of this weekend’s V8 Ute Series races.

Cameron McConville and Chris Pither traded the second and third positions, with Pither beating McConville in race two and McConville pushing past Pither in race three.

The final race of the Touring Car Masters saw the Fords take the podium, with John Bowe, Jim Richards and Eddie Abelnica taking the top honours.

The Australian Formula Ford Championship round was decided today with Cameron Waters earning enough points from his sixth place finish to wrap up the Championship with one more round to go.

Jack LeBrocq continued his winning streak with victory in race three, while Tom Williamson and local Nick Foster closed out the podium in second and third respectively.

The Armor All Gold Coast 600 is a partnership between the Queensland Government and V8 Supercars, with the event set to return to the streets of Surfers Paradise across October 19-21, 2012. For more information, visit www.goldcoast600.com.au

The ‘emotionally brutal’ F1 moments that made Russell stronger