IRWIN RACING NARROWLY MISSES OUT ON TOP 5 RESULT IN TASMANIA 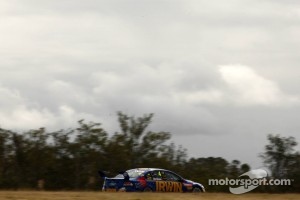 Alex Davison qualified for the 50 lap race in seventh position and held his place in the top 10 throughout the entire race.

Running eighth prior to pitting for fuel and tyres; a strong pit stop by the Stone Brothers pit crew saw him jump Paul Dumbrell to take seventh.

When teammate Shane van Gisbergen locked up at the hairpin it lost him several places and Davison capitalised, jumping up to sixth place.

Davison was happy with his IRWIN Tools Ford Falcon and is looking forward to another good performance tomorrow.

Coming into today’s race 55 points adrift of eighth place in the series, Davison has closed the gap to 10 points and is aiming to leave Tasmania having improved his place in the championship.

What IRWIN Racing’s Alex Davison had to say:

"It was a good day out, very solid. We had a pretty good clean race. Luckily we got into a bit of a rhythm in both stints. I managed to drop the guys behind me, which meant I didn't have to worry about them. I hung on to the lead group as well, a few times we got right up close to them but we didn't quite have the pace to battle with them . At the end I got right on to them when they were battling, but I was struggling with a fair bit of brake fade, so I couldn’t do much about trying to overtake them. The IRWIN Ford is pretty good; it doesn't take much around here to really move up or down the grid, hopefully if we can qualify well again tomorrow we can get another good result. To improve the IRWIN Ford a little bit ahead of tomorrow’s race would be good.”

What IRWIN Racing’s engineer Dan Kroehn had to say:

“It's a nice return to form. It’s obviously the first round back from the enduro events where we had some up and down luck in terms of car speed. The speed returned at Bathurst and the Gold Coast events but we didn’t get the chance to put the points on the table. Today we redeemed ourselves and came away with the result that we have been working so hard for. Alex (Davison) drove really well, he’s pretty happy with the IRWIN Ford as well, so we’re looking forward to backing up in the longer race tomorrow.”