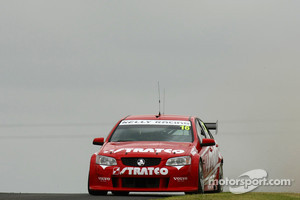 The young duo starred aboard a fast #16 Stratco Commodore on a day where all four Kelly Racing Commodores finished in the top half of the field in the first endurance event of the 2011 V8 Supercars Championship season.

Pepsi Max crew drivers Greg Murphy and Allan Simonsen had a great comeback after falling to the bottom of the order in the opening stint of the 113-lap race. A late pit stop allowed Murphy to use fresh tyres to race up the order to finish in 13th place in the #11 Pepsi Max Commodore after being a lap down at one point.

Rick Kelly and Owen Kelly scored eighth place aboard the #15 Jack Daniel’s Commodore, Rick Kelly’s 10th top 10 finish for the season and enough him to maintain fourth place in the 2011 V8 Supercars Championship points standings after 19 of 28 races.

Craig Lowndes and Mark Skaife won today’s L&H 500 ahead of Jamie Whincup and John McIntyre, with Will Davison and Luke Youlden in third place.

The 10th event of the 2011 V8 Supercars Championship is the Supercheap Auto Bathurst 1000 at the Mount Panorama circuit in New South Wales on October 6-9.

“Tim did a fantastic job – he drove the hell out of it and drove a very, very smart race,” said David Reynolds.

“He brought the Stratco Commodore back to me in a strong position and I was able to take over and progress from there.

“We always got stuffed by HRT exiting their pit box and it cost me spots each time we pitted, but I was able to use our car speed to make those places back up on the track.

“The Stratco car was fantastic today and a pleasure to drive. It is the best it has been all year and I was so excited out there during the race.

“Rick passed me early in the last stint but it looked like he was trying really hard, so I let him go and tried to concentrate on managing our tyres

“The car got better and better over the stint and came home strong so I was able to get back past him and get sixth, a great result for all the team's efforts.”

“We are pretty happy with that finish,” said Tim Blanchard.

“Dave did an awesome job, picked off a few cars and drove a clean race with no mistakes, we looked after our tyres and it worked out well for us.

“This is my second main series start so to be well inside the top 10 is awesome and we are pretty happy with today.

“Dave did an awesome job today, the Stratco Commodore was fast so we are pretty excited for Bathurst now.”

“We were very lucky with the way the race panned out,” said Greg Murphy.

“The Safety Car saved our arse today big time. It put us back on the lead lap albeit near last place.

“We ran a different strategy and it was a bit of a shock to end up where we were really.

“To be 13th is lot better than in the 20s somewhere, which is where we were looking at finishing, so it was a bonus to have the strategy allow us to race back into the top half there at the end.”

“The first part of the race went really well until I had a massive brake lock-up going into Honda,” said Allan Simonsen.

“Basically I had to go down the escape road, turn around and come back on and went from inside the top 10 to down the back.

“That was a big disappointment from my own point of view. I would have liked to have given the car back to Greg in a top 10 position so that he could have done the rest from there.

“As it was it was tough but he did extremely well as always. Baz (#11 Pepsi Max Commodore Race Engineer Barry Ryan) did a fantastic strategy so it got us back in the mix and Greg has got some good, fresh tyres towards the end and was able to drive past a lot of people to finish 13th to his credit.”

“I think that result is pretty much where our car pace was at this weekend,” said Rick Kelly.

“It was quite an uneventful race with Safety Cars and the like. They called one for some birds on the track there, which bunched us up a bit, but it was hard for us to take advantage of those extraordinary circumstances like that Safety Car and oil on the track.

“When it is just outright racing with only one Safety Car you can't beat people who are faster than you and today was a little bit like that.

“Where I qualified the #15 Jack Daniel’s Commodore due to my poor start yesterday didn't help the situation.

“I think we did pretty well to finish in eighth today. We switched up our tyres a little bit and ran our best set earlier in the race. It gave us an advantage in an earlier stint but we lost out in the end there.

“All in all we did OK. Sixth would have been a good result for us but we lost two spots in the final stint and eighth is not too bad.”

“We've been struggling all weekend and never really hit on it,” said Owen Kelly.

“We changed things overnight again and we changed more again after the warm-up today.

“We did the best with what we had. We didn’t really roll the #15 Jack Daniel’s Commodore out of the truck where we wanted to be so we were chasing all weekend.

“It wasn't quite there for us but at least we made the best of a bad day and got Rick some good championship points.”

“It was a bloody hard day out there today,” said Todd Kelly.

“The fact was that we just didn't have a fast enough car and instead of attacking we were covering and in defence-mode the whole race.

“It was just way too hard on its tyres. It really cooked the rear tyres especially during the race and then it makes you weak everywhere, cornering and especially under braking.

“We just had no pace towards the end there and got cleaned up by the guys who pitted later and had fresher tyres, so there absolutely is nothing you can do about that.

“There was some pretty average driving out there. Bargs ran me off in one of the fastest corners on the track coming onto the front straight. That could have been a lot worse so it's good to come back with a straight #7 Jack Daniel's Commodores after dealing with those kinds of blokes.”

“We had high hopes for this weekend,” said David Russell.

“Todd and I were really looking at a top five today for the #7 Jack Daniel’s Commodore - that was our goal.

“But it was a solid result and personally I've learned a lot about the car today.

“They work so hard. We had a bit of a drama with the wheel guns at a pit stop but they got in and fixed it really quickly so we didn't lose too much time at all.

“Todd had a great stint in the last half of the race. Towards the end of the final stint the tyres were going away and he was just hanging on. He did a good job to keep it in a solid position in the top 15.”