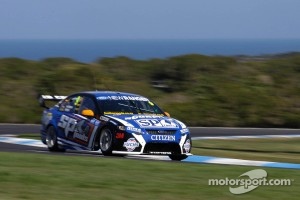 The L&H 500 once again provided a brilliant race for V8 Supercar fans, with Stone Brothers Racing’s pairing of Shane van Gisbergen and John McIntyre just missing out on a place on the podium after 500 gruelling kilometres at the Phillip Island Grand Prix Circuit this afternoon.

After starting the race from the second row of the grid – and the second-placed HRT Commodore of Garth Tander and Nick Percat having to start from pit lane – John McIntyre quickly settled into second place before losing several places in the first round of pit stops. Handing over the #9 SP Tools Racing Falcon to van Gisbergen on lap 48 for the long run home, ‘The Giz’ put in a blistering performance to climb his way back up into second place behind the Triple 8 Holden of Craig Lowndes and Mark Skaife. The #9 Falcon was up to the task, and was consistently the fastest car on track and looking a certainty for a podium finish, until when in the closing stages, van Gisbergen picked up debris on his right-front tyre – which coupled with fading tyre life – caused him to rapidly slide back to fifth place in the closing laps, where he eventually finished.

Van Gisbergen’s fifth place today keeps him in the Championship chase, sitting in third spot behind the Triple 8 duo of Jamie Whincup and Craig Lowndes.

Overall, the ‘endurance season’ opener proved a strenuous affair for SBR today, with both the #4 IRWIN Racing and #47 Lucky 7 Racing Falcons struggling to find a good footing at the ‘fast and flowing’ track – finishing the race in 22nd and 24th places respectively.

The SBR Falcons will undergo another pre-Bathurst test in the next week at Queensland Raceway – before returning to the famous Mount Panorama for the Bathurst 1000 on October 6-9.

“To be honest the day didn’t look all that promising during John’s first stint because he was complaining that there was a ‘miss’ and the car seemed a bit off – but once I got in I just pushed it really hard - and while there did seem like there was something not quite right, we had great speed and was able to reel in the blokes in front. During the last stint the Triple 8 guys obviously had some better tyres and were able to pull away – I pushed pretty hard and was able to hang in there but then in the last few laps my tyres had pretty much had it and I was lucky really, to finish where we did. Overall I’m pretty happy with the way things went this weekend and the race today – fifth is my best ‘key-event’ endurance performance so that’s something I’ll remember. This weekend gives us a good grounding for Bathurst so I’m really looking forward to getting back amongst it then.”

“Today was a great day – everything pretty much worked to plan for car #9. My job was to keep us in contention and give Shane back a car in the best position I could – which we achieved. The car was really strong and I was able to drive it to the times the guys wanted. It was a shame missing out on a podium but Shane was able to keep the car on the road at the end there where most other drivers would have tipped it off – I was really proud of the way he drove today. Looking forward to Bathurst, things are pointing in the right direction – we had great car-speed and I’m obviously comfortable in the car so I’m looking forward to another solid enduro performance.”

“I made a great start –I think collecting about nine places on the opening lap – but then I was getting bashed around by (Jason) Bargwanna, who once he got past tipped someone around who I had to go off-track to avoid – so that cost me a lot of places. The Safety Car came out at the right time because we actually had a damaged wheel and would have had to pit anyway – so that did roll our way. In general we really struggled with car-balance this weekend but during the race the car was the best it’s been all weekend so we’ll have a look at the data during this period and see what transpires out of it at our next test.”

“My first stint was rather frustrating – I just couldn’t find any grip. The second stint on new rubber was much better – a dramatic difference in the way the car handled but it didn’t seem to last. The fact that I ‘flat spotted’ a tyre didn’t really help things and from there it was pretty much a downward spiral. We’ll regroup though and bounce-back at Bathurst.”

“Extremely tough weekend. We showed glimpses of our Queensland Raceway form but we just couldn’t get the car to where we wanted it to be. From qualifying we were pretty much on the back foot. During the race we chewed through our tyres and eventually went backwards at a rate of knots. We’ll look closely at things we gleaned from this weekend prior to Bathurst and set it straight again so we can get back up to where we should be. ”

“The first stint was ok but I got turned by someone at turn ten and lost a lot of ground and from there it was an uphill battle. We just need to get everyone together and regroup, refocus and not get too lost in this weekend so we can hit Bathurst with a fresh, positive outlook and more competitive package.”