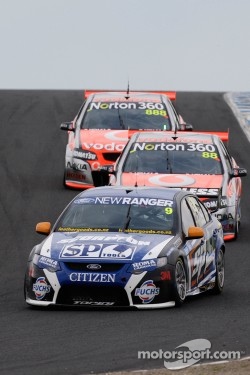 McIntyre ran the first of the 14-lap ‘qualifying’ races, and was the recipient of the mandatory pit stop which required by one of the drivers in today’s two races. Starting from fifth place on the grid, McIntyre was caught up in the usual turn-one muscle-flexing, but escaped unscathed - and while his registered finishing position was 19th, the majority of the field did not elect to pit making him, in effect, the second car on the road at race’s end.

Van Gisbergen also had a great day, qualifying on the front row in second place for his ‘qualifying’ race. It was a seemingly easy race for the #9 SP Tools Falcon, with van Gisbergen making a brilliant start ahead of the Triple 8 Holden’s who had to eventually conduct their mandatory pit stop leaving van Gisbergen to put his head down and cruise to an easy victory.

The other bonus for van Gisbergen today is that he picks up another 66 points towards his Championship title hunt.

Pit strategy for cars #4 and #9 didn’t play out as well during today’s sessions, but with a gruelling 500km (113 laps) race ahead – and fight-backs being a SBR specialty – tomorrow’s race promises to be one not to be missed.

The SBR Falcons will be returning to the track tomorrow morning for a 20-minute warm-up session before the 500km feature race at 1.35pm.

“During the season we get new build batches of tyres from Dunlop and just when we’ve just come to terms with the last batch, we have a new one this weekend. While they only vary a fraction you sometimes have to make slight car changes to accommodate, but we’re getting on top of them very quickly which is good.”

“While Shane and John’s run played out well, our strategy with car#4 and #47 probably didn’t turn out as well as we would have liked - but it’s a very long race, and with the experience of our drivers it’s going to be a very exciting race to watch unfold.”

“We probably didn’t have the smoothest start to the day but it came good when it mattered. Johnny did a great job in his race and combined with my win, third is a pretty good place to start tomorrow for what is going to be a tough race. I’m really happy with the way the car balanced itself out and looked after its tyres today as the race went on – it would have been nice to have (Jamie) Whincup pushing me for the entirety but I’m sure there’ll be plenty of time for that tomorrow.”

“Shane and the guys did a great job today and the way the car responded to the changes we made was the best I’ve seen it during all my drives with the team – which is a real boost going into tomorrow. I got hustled a bit at the start of my race and lost a place or two but we picked up enough points to make sure we have a good starting position tomorrow.”

“I was reasonably happy with my practice pace but we encountered a couple of dramas in qualifying that put us back a few steps until we got on top of it in Daniel’s run. My qualifying race was pretty uneventful, and while I made a few places while others had to fulfill their mandatory stops, the car probably wasn’t quite as good as it could be. The benefit from Shane’s good run is that we now have some good data we can have a look at tonight which should make for a much better day tomorrow.”

“We progressed throughout the day after a couple of hiccups and I had my first run on ‘greens’ (new tyres) which was good. It’s so competitive with just a few tenths keeping us out of the top ten. Our strategy didn’t really work in our favour, but we weren’t the only ones in that boat. As Tim said we’ll see what we can learn from car #9’s data tonight and bring it on for tomorrow’s race.”

“Today was a really tough day – we struggled to find the set-up we needed but are working hard to correct it. Tomorrow we have a big job ahead of us, but between myself, the Team and David (co-driver Brabham) we’ll fight on and make the most of what is sure to be a cracker race.”