SHANE van Gisbergen won the battle, but Will Davison and Luke Youlden won the war in the second Grid Sprint at Phillip Island today.

While the SP Tools Falcon driver claimed the second 14-lap sprint of the day, the combined results of both sprints gave Davison and Youlden pole position for tomorrow's first endurance race of the season.

After Davison had earlier won his sprint, Youlden took the car's compulsory pit stop and kept his nose clean to finish 15th and locked the #6 Falcon into pole position.

"Luke did what he needed to do so I'm pumped," said Davison.

It's a tough slow tomorrow but we're going to enjoy this for a minute.

"It's a tough slow tomorrow but we're going to enjoy this for a minute. We all know Sunday is payday.

"We've made big gains. We were really unhappy yesterday and this morning but this is good."

Youlden became the 50th driver in Australian Touring Car Championship/V8 Supercars Championship history to record a pole position, while it was Davison's fourth career pole and second this season for Ford Performance Racing.

A 14th place for impressive rookie Nick Percat was enough to put he and Garth Tander onto the front row of the grid for the Toll Holden Racing Team tomorrow, while Sprint winner van Gisbergen will line up third with co-driver John McIntyre.

Pepsi Max Crew's Greg Murphy finished third in the second Sprint to put he and Allan Simonsen into eighth on the grid for tomorrow's race. 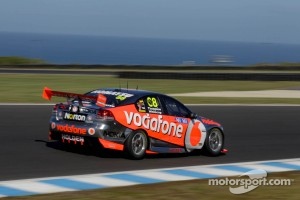 A total of 17 cars were required to make their compulsory pit stop in the second Sprint.

The field will next hit the Phillip Island Grand Prix Circuit at 10.30am AEST on Sunday for a warm-up session prior to the start of the 113-lap, L&H 500 to round out the weekend of action.