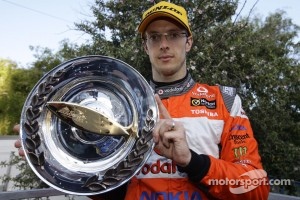 After a hard fought second place finish in the final leg of the Armor All Gold Coast 600, Jamie Whincup’s co-driver Sebastien Bourdais was awarded the inaugural Dan Wheldon Memorial Trophy.

Lowndes and Priaulx suffered another frustrating end to a promising race weekend, a lengthy pitstop and black flag relegating the car #888 duo down the order.

Bourdais started on Pole after an impressive Qualifying session from Whincup, the Frenchman broke away early in the race, Whincup following suit and dominating in the 102-lap race until he was passed by Winterbottom 8 laps from the end.

Early race strategy looked promising for Lowndes and Priaulx, the englishman made an impressive start leap-frogging to second position on the opening lap.

After losing time in the pits, the #888 TeamVodafone Commodore could not recover the positions lost, finishing 20th in the final 300km race.

Sebastien Bourdais was the hero of the day, emotionally excepting the Dan Wheldon Memorial Trophy for being the highest points earner out of the International drivers.

Whincup now sits 143 points ahead of Lowndes in the V8 Supercar Championship Standings.

With the endurance events wrapped up, the TeamVodafone duo will now prepare for Tasmania, kicking off from the 11-13th November.