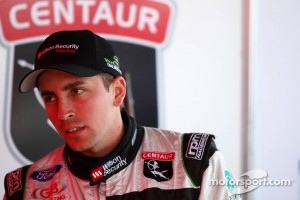 Tony D'Alberto is taking the positives out of a promising race weekend at Symmons Plains Raceway at Tasmania today.

Driving the #3 Wilson Security Racing Falcon, D'Alberto scored 15th and 16th place race finishes – but that does not tell the whole tale of a promising weekend.

Qualifying for Saturday's Race 23 was one of D'Alberto's best for the year, taking fifth place – equalling his performance at Hidden Valley in June.

Due to an incident under yellow flags in Friday practice, D'Alberto was handed a three grid spot penalty, forcing him to start from eighth.

After a solid start to the race, two delaminating rear tyres cost him a chance of progressing through the field. To make matters worse, a hit from behind by Holden driver Todd Kelly at the hairpin relegated the Wilson Security racer back to a 15th place finish.

D'Alberto and the team held high hopes for Sunday's racing activities, but a minor mistake at the final corner in qualifying saw the #3 car line-up in 17th place.

Tony settled into a top 15 place early in the 200km race, but a number of controversial clashes with Steve Owen hampered D'Alberto's push towards a top 10 result.

He eventually crossed the line in 16th place – well down on the team's weekend's expectations.

The V8 Supercars circus has a quick turn around, heading straight to Melbourne for the Norton 360 Sandown Challenge next weekend.

"Two mid-field finishes weren't great, but it's not the end of the world," said Tony D'Alberto.

"Our speed was outstanding this weekend, our pit stops were good, it's just a shame we couldn't convert them into some top five finishes.

"We had a few dramas in the races – tyres delaminating on Saturday, and then today with other competitors.

"We really should have been with the other FPR in qualifying today, but I made a small error at the last corner, and it really hurt our day because I had to start in the pack.

"Steve Owen jumped a bunch of us with a short pit stop and really held up a bunch of us. It took me far too long to get by – he was blocking me and weaving on the straight at 250kmh. It was totally unnecessary. It was disappointing, because I thought we'd done a pretty good job this weekend.

"Our car was easily the best I've ever driven around Symmons Plains. I've never been near the top 10 here, so it was nice, but it was obvious that we could have achieved a lot more."

"You really have to look at the positives from a weekend like this, and there were a lot of positives for us to take away," Al D'Alberto said.

"There were a couple of issues that held us back, but when you look at the weekend as a whole, I think we've done quite well.

"Now we focus on Sandown, another track where FPR has done well in the past, and a track where we have achieved great results.

"We are looking forward to getting back out there and continuing our forward progress."