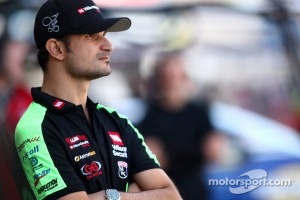 Formula 1driver Vitantonio Liuzzi has impressed in his maiden V8 Supercars race meeting at the Armor All Gold Coast 600.

Liuzzi, driver for the Hispania F1 team, teamed-up with Tony D'Alberto in the Wilson Security Racing Falcon FG for the international-flavoured Armor All Gold Coast 600 this weekend.

The Italian driver improved as the weekend progressed, gaining as many as 10 positions in Sunday's race during his opening stint before receiving a controversial penalty from the Stewards for kerb hopping.

In Saturday's first 300km race, the Wilson Security Racing Falcon did not finish when a power steering failure derailed their solid attack. At the time of the failure, the team was in contention for a top 15 place.

Sunday's race was a hard fought affair, with both Liuzzi and D'Alberto completing pit lane penalties for infringements. Liuzzi was penalised for kerb hopping (a contentious issue over the course of the entire weekend), while D'Alberto was forced to drive through pit lane when he collected the back of Gianni Morbidelli's Falcon (partnering Dean Fiore).

Despite the issues, D'Alberto and Liuzzi managed to bring their Ford home on the lead lap in 19th position.

D'Alberto remains in 25th place in the V8 Supercars Championship.

The next event of the V8 Supercars schedule heads to Symmons Plains, Tasmania, for the Falken Tasmania Challenge on November 11-13.

"Tonio just got better and better as he got more comfortable in the car," Tony D'Alberto said.

"To start with, he struggled with the size of the car. He found it difficult to thread the car through the chicanes, find apexs, braking and all the things that we take for granted.

"By the end of the weekend, he was very quick. We'd have him back in our team without a doubt.

"I think we had a pretty good race car this weekend, but we weren't quite fast enough to be in the top 10.

"The Sunday crash was my fault. I ran into the back of Morbidelli. I wasn't even trying to pass him, but he proped and I had no where to go and If you get a tap there, you are in a bit of strife.

"The car was improvement from Saturday's race. These cars don't go too well without power steering. That really ruined our chances."

"Yesterday we had some problems with the car and today we were having a really good race until the Stewards gave me a drive through (for kerb hopping). I was really pissed off with the decision. I think they were unreasonable and it was a really stupid decision.

"I'm hope I will get another opportunity in the future I think now I understand better the car. I learned a lot about it and during the race we had a really good race pace. So I'm really looking forward in case it happens again in the future.

"I will try to take it, always depending on my appointments in my main category that is Formula 1. But for sure if it happened I would take it."

"It was a challenging weekend, but we are pleased with our performance," Al D'Alberto said.

"Vitantonio did a great job, given his lack of experience in these cars. He fitted in very well with the team and we were very pleased to have him.

"It's very unfortunate to have the two penalties in the race, but to be able to still finish on the lead lap inside the top 20 is a good effort."