The V8 Supercars Australia did not disappoint their fans in Melbourne as they turned up the heat with a dry track for the second race of the weekend at Sandown International Raceway; especially compared to Saturday’s very wet conditions. Earlier today, championship point leader Jamie Whincup notched his ninth pole of the season, and he was joined on the front row by Mark “Frosty” Winterbottom.

The two have challenged one another several times this year and again today, they were on top of the leaderboard. Whincup did not cave-in to the pressure from the driver of Ford Performance Racing #5 Orrcon Falcon as the duo battled throughout the race. Even the safety car periods saw TeamVodafone’s Whincup remain in the lead in his #88 Commodore.

Taking the lead with a perfect start when the lights went out, Whincup was unstoppable, and immediately was laying down fast laps. When the checkered flag flew, Whincup not only extended his points lead over his own team mate, Craig Lowndes, he also notched his tenth victory in 2011. Winterbottom ended second followed by Will Davison in the FPR #6 Trading Post Falcon. Lowndes finished fourth in his #888 Commodore.

It’s all nowhere near done for the title.

“It was just a matter of getting there at the end. I couldn’t be happier,” said Whincup. “Both cars have been quick all year. We take the battle to Sydney, which is the way it should be.”

Winterbottom commented after the race, “We had a good day. We tried our best and tried to stay as close to the lead as we could but today shows we’ve made massive gains. Our car performance was pretty good and second and third was good from where we have come from.”

At the start of the race, Lowndes was right on the bumper of Shane van Gisbergen in the #9 SP Tools Falcon. Chasing the two of them was Will Davison who was not going to give up a shot at the podium in his Falcon. Sitting quietly in third was Lee Holdsworth in the #33 Fujitsu Racing GRM Commodore. The Commodore and Falcon drivers knew that after Sunday’s race was over, they would have just one round of double races to settle the final championship standings.

With the rest of the field behind them, Whincup and Winterbottom were able to open a gap to the train of V8 Supercars behind them. Lowndes, who is the only remaining driver that can take the crown out of the hands of Whincup, made his pit stop earlier than the leaders and had a clear track to lay down hot laps. Plus he wanted to move past van Gisbergen when the Ford driver made his pit stop.

In the meantime, Paul Dumbrell (#55 Bottle-O Falcon) was looking to take over fourth from van Gisbergen and he made it stick. The season finale will mark the end of Dumbrell’s career in the series; however he might do a few selected events next year.

Finally the two leaders plus van Gisbergen pitted for tyres and fuel. As Whincup and Winterbottom headed out of the pits to rejoin the field, they had contact but it was not enough to deter them and they went right back to their own private fight for the win.

Lowndes got a break when his main rival during the early part of the race went off the track heading into Turn 1 after exiting the pitlane. Van Gisbergen locked up his brakes but he did save it. Holdsworth was one of the last to pit and ended up behind Lowndes who now held third. 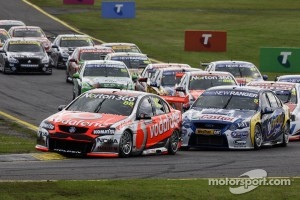 The action continued after the pit stop with the usual side-by-side light contact and the light tap of a nose to the rear – more like a reminder they all wanted the win and the points paying positions.

On lap 23, the safety car was deployed for debris on the track. The order was Whincup, Winterbottom, Holdsworth, Michael Caruso (#34 Fujitsu GRM Commodore), Tim Slade (#47 Lucky 7 Falcon), Will Davison (#6 Trading Post Falcon), Dumbrell, 2010 champion James Courtney (#1 Toll Holden Racing Team Commodore) and Garth Tander (#2 Toll Holden Racing Team Commodore). Van Gisbergen’s day went from good to bad as he had to dive into pits for new tyres due to his earlier near miss at Turn 1.

The restart on the 27th lap saw Whincup sail away while Courtney and Dumbrell had major contact that dropped Dumbrell out of the race. Winterbottom had no chance to stay in touch with the series points leader and actually had to keep at bay the other TeamVodafone driver who wants the title as Lowndes was all over “Frosty”.

By lap 38, Holdsworth appeared to be losing ground as Will Davison moved into fourth. Two laps later, Winterbottom and Lowndes headed to pitlane, and were the first to make the final stop. Others including the leader came in later but Whincup, again, retained the lead despite the fact that Will Davison was the last to pit and by the time he did, he not only had fresh tyres on but he also appeared to have fresh energy.

As he exited the pitlane, Will Davison tried to take the lead but Whincup was sailing by, and Winterbottom was able to maintain second place. That left Lowndes to fight it out with Davison.

About delaying his pit stop, Whincup said, “I was just trying to get the team to give me a few more laps on the last set of tyres and we did that.”

With 20 laps remaining, Whincup was building a cushion to second place Winterbottom. Will Davison was still holding off Lowndes which allowed Holdsworth to gain ground and join in on the battle for third.

All things considered third is great.

The second and final safety car period was on lap 47 due to debris. It also effectively wiped out the gaps which made it a wide open race for the win when the green flag was shown on the 50th lap. Adding to the excitement was at least one car that was a lap down to the leaders.

Heading into Turn 1, Tander made his move on Holdsworth and was successful as the action was behind them as contact was made between Alex Davison, Russell Ingall, and Steve Johnson. A drive thru penalty was handed to Ingall. Apparently Karl Reinlder was either involved or went off on his own as his left side door was missing.

With five laps remaining, the top of the leaderboard were all concentrating to stay on the podium. Whincup’s gap to Winterbottom was nearly two seconds. After the race, the winner smiled and said, “I enjoyed that. I got a bit cocky under the Safety Car and had to tell myself to concentrate for the last 15 laps.”

Behind them were Will Davison, Lowndes and Tander, who all were aiming for third. Davison took the final podium step followed by Lowndes, Tander, van Gisbergen, Slade and Holdsworth. “All things considered third is great. We have been marching forward on soft tyres in recent races though Sandown is a very different circuit and it shows that we can be competitive at places where tyre degradation is high,” said Davison.

Lowndes was pleased on the battle for third, but was also disappointed as he said, “I wanted to come out of this weekend and go into Homebush within 300 points of Jamie. I had a great run with Will (Davison) and had Garth (Tander) closing in. Homebush could be anything.”

Said Holdsworth of his slide down the leaderboard, “It was good to finish up in the top three in qualifying but we couldn’t maintain the pace in the race and the tyres burnt up. Once we hit a Safety Car we’d lose a heap of speed on the restarts. I don’t know whether it’s a temperature thing or not, but on the restarts we’re just nowhere.”

Next up is the season finale at Sydney in two weeks and the championship is still on the line between the two team mates: Whincup (3033) and Lowndes (2845).The Teams championship was decided yesterday in favor of TeamVodafone.

“It’s all nowhere near done for the title. We’re going to go away, have a sleep, recoup and prepare the car and come out strong in Sydney,” said Whincup. 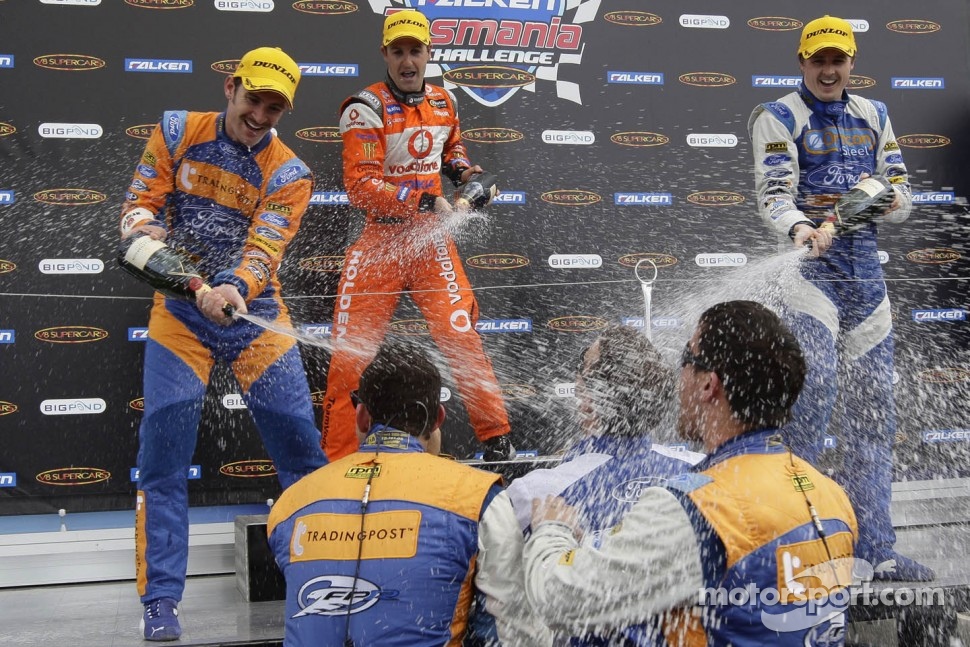