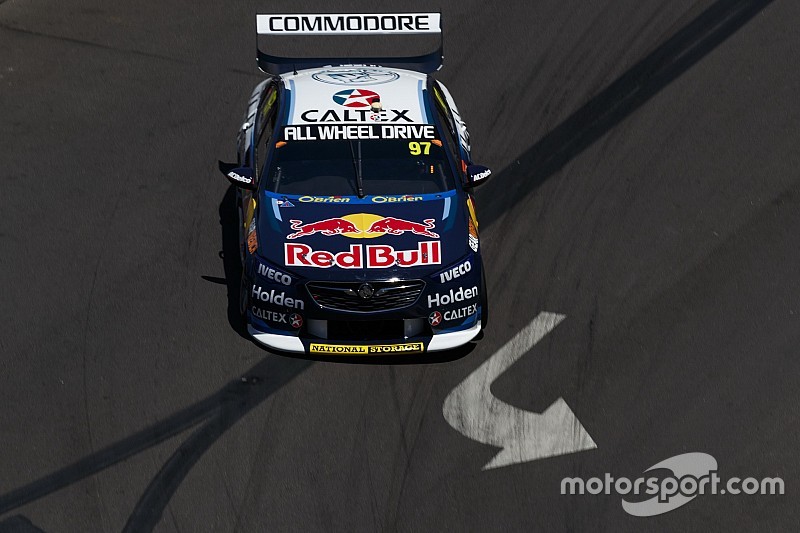 Shane van Gisbergen's stunning win in Newcastle could be under threat, as Supercars officials investigate an alleged pitstop infringement.

The Red Bull Holden driver charged home to snatch victory from title rival Scott McLaughlin on the final lap of a thrilling encounter in Newcastle today, setting up a winner-takes-all two-point showdown tomorrow.

However that win is now under threat, with Supercars officials investigating whether van Gisbergen's car was lowered to the ground with the fuel rig attached during his third and final stop.

Should he be found guilty, a post-race time penalty could strip him of his win and give McLaughlin a more significant advantage heading into tomorrow's decider.

The regulations read “the car must have all four (4) wheels off the ground while refuelling is taking place”, and “if a car is lowered to the ground before refuelling is complete it must be raised immediately and until the refuelling has been completed”.

According to DJR Team Penske managing director Ryan Story, footage of van Gisbergen's car hitting while refuelling is yet to be completed is "pretty clear".

"I have. The view is pretty clear," said Story when asked if he'd watched the footage.

"It's being investigated by the officials at the moment, so I won't speculate as to what will happen or not. But the rules are was clear. It's one of those things. We'll wait and see what happens.

"When you look at the footage, it's just one of those things. It's being reviewed at the moment, we'll wait and see what the outcome is of that."

Triple Eight team manager Mark Dutton, however, said he has no concerns over the legality of the stop.

“No, no. The guys work very hard, the spike and fuel man, to be as in unison as possible," he said.

“Because they reacted at the same time, you could almost not script it better.

"Sometimes things happen live and you think ‘oh, have we missed something?’. But it’s all good. We went through and watched all of the stops and they were spot-on.

“You’ve got to be careful you don’t multiply or add up your reaction times. The fueller’s reaction time, to when they need to drop and then the spike man, the car release man and the driver.

“We train really hard to get them in sync and today they’re on the money.”

It's the second investigation in as many rounds for car #97, following the controversial wheel-spinning saga at Pukekohe.

It could also lead to another protest from DJR Team Penske should officials find there to be no breach.