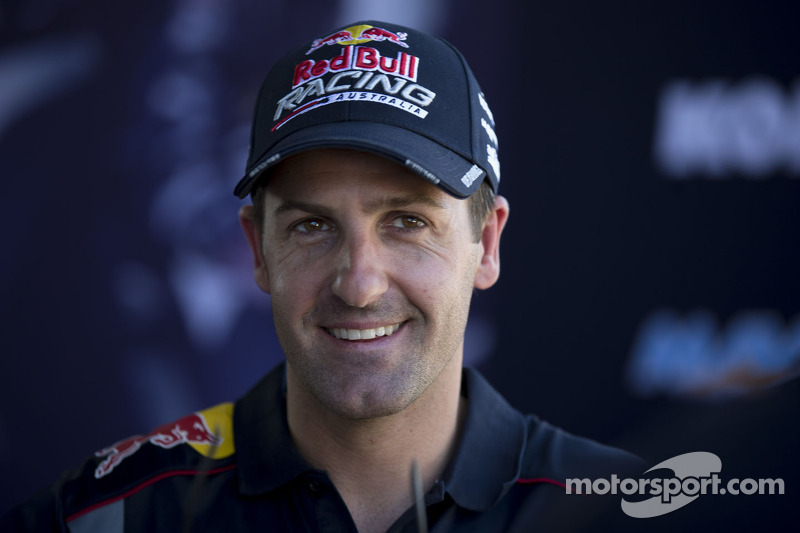 Penske Racing’s Tim Cindric is visiting Sydney, Australia. Casual visit or will the NASCAR / IndyCar team be looking for a new adventure?

Jamie Whincup has given himself the best possible chance of retaining his V8 Supercars championship, taking pole position for the penultimate race of the series at Sydney.

Whincup, driving his Red Bull-sponsored Holden was fastest in qualifying then fastest again in the Top Ten Shootout. Mark Winterbottom in the Pepsi Max Ford had qualified seventh but improved in the shootout to second.

Third went to Shane Van Gisbergen, who will share the second row of the grid with team-mate Jonothan Webb. Van Gisbergen brushed a wall early in his lap, as did Webb. Perhaps caroming is part of their strategy?

Craig Lowndes, Whincup’s team-mate and currently second in the championship, had a horror run in the shootout, a half-spin relegating him to tenth. The fourth contender, Will Davison (Pepsi Max Ford) will start sixth.

Garth Tander suffered substantial damage to his Holden Racing Team Commodore in qualifying, hitting the concrete wall midway through the session. Tander will start last of the 28 cars.

An interested spectator this weekend is Penske Racing’s Tim Cindric. Speculation is rife that Penske might be looking to buy into the series, either as a sponsor or as a team owner. At least two Racing Entitlement Contracts (or franchises) are set to be sold to the series owners, V8 Supercars Australia and Gary Rogers Motorsport is selling a pair of Holdens pending their move to Volvo next year. Perhaps we’re reading too much into this, but this series is as good a source of rumour and innuendo as any other.

The first of the weekend’s two races will start at 5.10PM local time and finish at approximately 7.20PM.

Sydney 500: and then there were four