Jamie Whincup is a winner again at Townsville.

The opening race of the Townsville 500 was a chaotic one where contact was common and clean laps were far and few between. Jamie Whincup secured his 81st career victory and sixth here after starting back in the tenth position. The remainder of the podium was filled out by HRT's Garth Tander and Erebus driver Will Davison

The 20th race of the 2014 V8 Supercar season kicked off in a big way. It was an all HRT front row but it didn't stay that way for long. Scott McLaughlin fell from third to fourth on the initial start, but why am I talking about him? Well, because he exited the first corner with the lead. Craig Lowndes, Garth Tander, and James Courtney all made contact, which was like the parting of the Red Sea for McLaughlin. 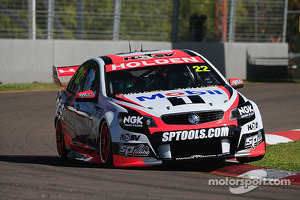 Then Jason Bright came out of nowhere, hitting Tander and Lowndes as well. The contact was far from over however. James Courtney promptly sacrificed a mirror to the racing gods after clipping the wall while trying to take over the lead. Behind them, Rick Kelly found himself with a bowed up hood after hitting and spinning Chaz Mostert.

Before a replay of that could be shown, title contender Craig Lowndes was sent spinning out of control, courtesy of Will Davison. He made contact with the wall and was forced to limp his car back to the garage for repairs. Out front, McLaughlin ran away as more chaos ensued around the second position. Tander was turned around by Jason Bright, but quickly regained his footing after losing a handful of places.

There was hip-checking, lawn-mowing, mirror-trimming, paint-trading, wall-scrapping, and other things of that nature going on throughout the entire field. It was an incredibly riveting race that was difficult to follow with all of the action unfolding at once and in rapid succession. Craig Lowndes returned to the race, but only to bring out the first of what would be two Safety Car interventions at lap 12. He buried his Holden deep within the tire barrier after losing the ability to steer and the crew is currently thrashing to get the wounded car ready for the second race.

Afterwards, Lowndes told reporters "It's been a hell of year...just been up and down like a yo yo." He's dropped to third in the standings as a result of the accident. His teammate Jamie Whincup led the way for the restart and would never be challenged for the spot. On the 27th lap, Tim Slade took his car to the garage after a promising run went sour due to a steering failure.

A few laps later, a full-course yellow was needed once again. Jack Perkins and Todd Kelly were fighting for some real estate, and Jack lost. After passing Kelly cleanly, a failed attempt at a crossover move sent Perkins' car careening nose-first into a concrete wall.

On the restart that followed, Garth Tander attempted a risky dive-bomb maneuver and it paid off. He took second place as McLaughlin fell into the clutches of those behind him. Scott McLaughlin did not go down without a fight though. He ran Davison wide and into the wall as they fought over the final step on the podium. Davison didn't take too kindly to that, running McLaughlin off the road soon afterwards. That dropped Scotty to sixth, which is where he would finish.

Championship leader Mark Winterbottom was able to salvage an 11th place finish after a poor starting spot. His lead over second place dropped from 161 points to 147, with Whincup now his closest pursuer. Lowndes is now 197 markers adrift of the lead after crashing twice during the first race.