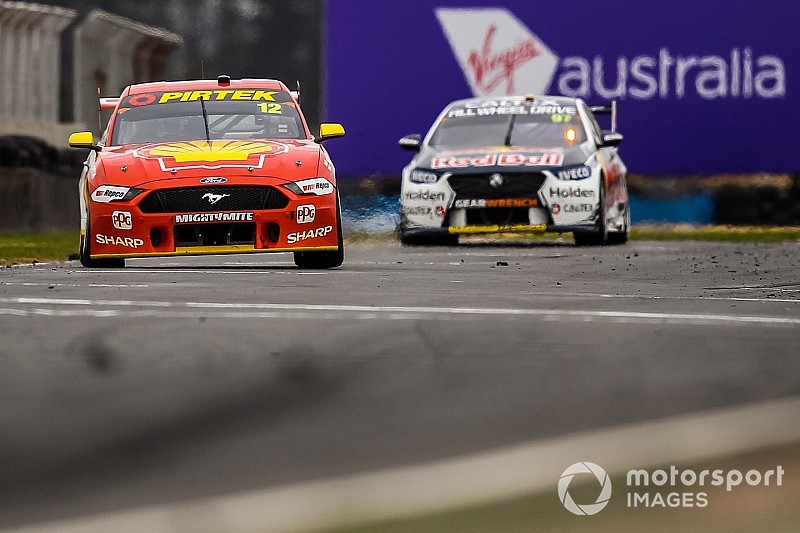 Supercars needs Triple Eight to take the fight to DJR Team Penske 'for the good of the sport', according to seven-time series champion Jamie Whincup.

There were signs of improvement from the factory Holden squad last weekend in Perth, with Whincup and Shane van Gisbergen finishing fourth and fifth on Friday night before Whincup grabbed a well-crafted second on Saturday night.

It was a promising recovery following a tough Phillip Island round, Whincup hailing it as a 'Most Improved' performance.

Still, the squad was powerless to stop another pair of DJR Team Penske wins. The top Ford squad took a one-two on Friday, Fabian Coulthard from Scott McLaughlin, before McLaughlin added an eighth win of the season on Saturday.

DJRTP has now taken 10 wins from the 12 races so far, and four one-twos from the last six.

Triple Eight, meanwhile, has just a single win to its name this season, a Sunday victory for van Gisbergen in Tasmania.

That comparative form puts the Mustang-shod team "in another league" according to Whincup, who also says it's important for Supercars that Triple Eight rediscovers its front-running mojo and takes the fight to DJRTP.

"The engineers have done a fantastic job to turn things around and give us competitive pace this weekend, but the next step isn’t a click of the dampers or click of a roll bar, there's a lot more involved," he said.

"The team next door has absolutely raised the game and they’re in another league at the moment.

"I feel that for the good of the sport it’s up to us to do the something and step up to the challenge.

"It’s fantastic to beat everyone else but if we are serious, we need to make some big changes to beat car #17 at a consistent level.

"We feel good about maximising [the Perth] weekend with the tools we had, but again, when we get back, we will sit down as a team and work out how we can get more tools in the toolbox.”

Whincup added that he's not expecting an in-form McLaughlin to make DJRTP easy to catch, brushing off any notion the reigning champion could drop the ball.

“Nah, it’s pretty straight forward [for McLaughlin], just work one week at a time, go into the next one and go as hard as you can," he said.

"It’s really up to us to step up and make a battle of it. If we can do that everyone will win.”

The Mustang, homologated by DJRTP, has been through two parity adjustments during the team's dominant stretch, with a re-positioning of ballast before Tasmania and a reduction in downforce heading to Perth.