Winterbottom hangs on in a thriller

Mark Winterbottom has broken through for his first race win in the 2012 V8 Supercars Championship today at Hamilton in New Zealand.

The Orrcon Steel FPR driver held off a fast-finishing Jamie Whincup to claim the Mark Porter Trophy in the last running of the ITM400 Hamilton street race.

"I had really good speed on the good tyres and Jamie had very good speed at the end," said Winterbottom, who celebrated his 250th V8 Supercars Championship race start in style by taking his 18th career race win.

I really wanted that win, an awesome result.

"I really wanted that win, an awesome result.

"It's definitely good to win anytime. It's good to hang on. Jamie's one of the best passers in the category but I wasn't going to let it go."

Winterbottom qualified on the front row of the grid with teammate Will Davison on pole, but it was the former that got the jump off the line and dominated the race to pick up his first win in New Zealand.

Davison ended up finishing third and retains a 21-point lead in the championship over Whincup.

"I give it everything I had, but it was a crazy battle in tough conditions," said Whincup.

"I got very close. I thought I was odds-on. The car hung onto its tyres well. I had to push Frosty back down the pit lane at the end coming back to the podium because he was out of fuel!"

Craig Lowndes finished fourth from the best of the Kiwis, Fabian Coulthard in the Lockwood Racing Commodore. 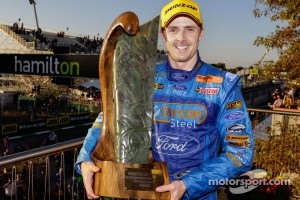 It was a day of drama for the Holden Racing Team. Garth Tander ended up 26th, 12 laps down, after pitting for repairs from contact with a tyre bundle while trying to pass D'Alberto.

A range of cars received pit lane penalties for triggering the timing sensors at the turn four chicane - the worst of them Frenchman Alex Premat who picked up three - plus a post-race 28-second penalty for a fourth indiscretion too late in the race to be brought into the pits.

Also given post-race 28-second time penalties were Jason Bright and James Courtney for the same reason, the duo ending up 21st and 22nd respectively in the final results.

The V8 Supercars Championship now moves back to Australia for the Tradingpost Perth Challenge at Barbagallo Raceway in Perth in a fortnight's time on May 4-6.

Davison On Pole, Whincup In The Wall