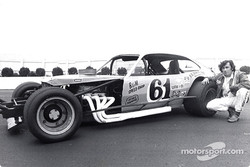 Richie Evans, a nine-time NASCAR champion, heads the NASCAR Modified All-Time Top 10. Six-time champion Jerry Cook is No. 3, with Ray Hendrick at No. 4 and Geoffrey Bodine at No. 5. All four also are part of "The 50 Greatest NASCAR Drivers of All Time" list compiled in 1998.

Mike Stefanik, one of two active Modified drivers on the NASCAR Modified All-Time Top 10, is No. 2 on the strength of his six titles and 65 career Featherlite Modified Series victories.

"This is an outstanding list of drivers from NASCAR's Modified history," said Cook, now NASCAR's competition administrator working out of the new Research and Development Center in Concord, N.C.

"Modified racing is NASCAR's oldest division and played a big part in the early growth of NASCAR. Fans loved the Modifieds -- and they still do -- because they're different from every other form of car in NASCAR."

Cook raced against all of the other drivers in the NASCAR Modified All-Time Top 10. "There was no one driver you could call the toughest," he said. "They were all tough, across the board. Nobody gave in to anybody and it made for great racing. That has carried over into today's Featherlite Modified Series. We have good car counts at all the races and tracks fill the seats."

No. 1 Richie Evans -- Named one of "The 50 Greatest NASCAR Drivers of All Time" in 1998, Evans remains the undisputed king of NASCAR Modified racing. Nearly 20 years since his death in 1985, Evans' presence is still felt among the Modified faithful. Nicknamed "The Rapid Roman," his career accomplishments included multiple track championships across the Northeast and hundreds of victories including a 37-win season during a stretch of 60 Modified races in 1979. Evans won nine NASCAR titles between 1973-1985, a championship total that is unmatched in all of NASCAR.

No. 2 Mike Stefanik -- By the time the dust had settled from the Evans-Cook rivalry that fueled NASCAR Modified racing in the 1970s, Massachusetts native Mike Stefanik was beginning a career that would re-define success in NASCAR racing. Stefanik's career accomplishments include four track championships, three most popular driver awards, more than 60 Featherlite Modified Series victories and eight NASCAR championships. Stefanik's six Featherlite Modified Series titles (1989, '91, '97, '98 '01 and '02) are accompanied by two Busch North Series championships, which he earned in 1997-98. Incredibly, Stefanik won the dual championships in two consecutive seasons, making him the first driver since Lee Petty to win two NASCAR division titles in a single season, and the only driver to do it twice. Stefanik also won the Eastern Motorsports Press Association's Northeast Driver of the Year award in 1997.

No. 3 Jerry Cook -- In a career that spanned three decades, Jerry Cook won 342 races and earned six NASCAR Modified championships (1971, '72, '74, '75, '76, '77). When his driving career came to a close in 1982, Cook stayed with the sport and helped shape the Featherlite Modified Series of today. Cook served as the series' director when it began in 1985 and remains with NASCAR as competition administrator. Cook was inducted into the National Motorsports Press Association's Hall of Fame at Darlington Raceway in '89 and named as one of "The 50 Greatest NASCAR Drivers of All Time" in '98.

No. 4 Ray Hendrick -- Over a 34-year racing career, Virginia's Ray Hendrick had a reputation of racing anything, anywhere. The countless stream of races in the 1950's, 60's and 70's included several stints with the NASCAR Winston Cup Series. Some records indicate Hendrick won as many as 712 races in his career. In 1993, Hendrick was inducted into the National Motorsports Press Association's Hall of Fame and he was honored as one of "The 50 Greatest NASCAR Drivers of All Time" in '98.

No. 5 Geoffrey Bodine -- Bodine began racing midgets at his family's Chemung Speedrome in upstate New York, at the age of five. Bodine became one of the earliest NASCAR Modified racing stars, winning nearly 600 races, by some accounts, in his career. In 1978, Bodine won 55 Modified races in a single season, a figure that landed him in the Guinness Book of World Records. Bodine advanced to the NASCAR Winston Cup Series in 1979 and was selected as one of "The Greatest 50 NASCAR Drivers of All Time" in 1998. Bodine has 18 career NASCAR Winston Cup Series victories, including the 1986 Daytona 500.

No. 7 Bugs Stevens -- When Carl Bergman wanted to pursue a NASCAR racing career while serving in the military in the 1960s, he knew his superiors might object to the idea. And, so the story goes, "Bugs Stevens" was born. Stevens became Bergman's assumed name at the race track, where he drove to perfection. Stevens won several track championships and Modified races across the East Coast, culminating with three consecutive NASCAR Modified championships in 1967-69. Stevens' son, Dave Bergman, continues the family tradition and competes in the Featherlite Modified Series today.

No. 8 Fred DeSarro -- In the shadows of Modified greats Evans and Cook, DeSarro managed to make himself known in the 1970s NASCAR Modified ranks by driving to win. DeSarro won several track championships at Stafford Motor Speedway and Thompson International Speedway in Connecticut, and was the NASCAR Modified champion in 1970. In 1972, DeSarro was the inaugural winner of Stafford's Spring Sizzler race, one of NASCAR Modified racing's premier events.

This Week in Racing History (September 14-20)

The DTM pivoted away from its touring car heritage by moving to GT3 cars in 2021, but it’s still indulging its history with familiar machines appearing on the support bill. A move to expand the offering for fans, the new-for-2022 DTM Classic Cup is already proving a worthwhile addition to its platform and attracting some of its past names to do battle once more.