Corvette Racing's Tommy Milner will be present at the Rolex Monterey Motorsports Reunion.

MONTEREY, Calif., Aug. 9, 2013 – From August 16-18, the Rolex Monterey Motorsports Reunion will pay tribute to the enduring legacy of the all-American Chevrolet Corvette, which stunned the auto world at its debut at the 1953 Motorama Auto Show in New York City. Now 60 years later, at Mazda Raceway Laguna Seca where historic automobile racing premiers as the only track-action competition during the Monterey Peninsula’s annual Classic Car Week, the Corvette will star as the event’s special marque, with seven generations of the magnificent sports car occupying special displays and/or paddock and pit areas before taking to the famous raceway for high-speed action.

Only 300 of the first-generation Corvettes were built, all of them in the color polo white with 150-horsepower, six-cylinder engines fitted with a Power Glide automatic transmission. Compared to the high-powered performance of Corvettes today, the 1953 Corvette was quite mild; however, the second- generation Corvette, the Corvette Stingray introduced in 1963, enjoyed considerable success on race circuits around the world. As a street car it had the perfect blend of high power and good looks. 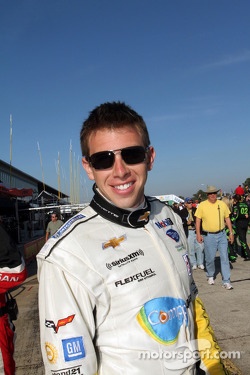 Helping the Rolex Monterey Motorsports Reunion to celebrate the Corvette and the 50th anniversary of the exceptional Stingray model will be various luminaries, including Corvette Racing team driver Tommy Milner, who will take part in Saturday’s popular Picnic in the Park discussions along with three-time world champion Sir Jackie Stewart, comparing the past of long-distance sports car racing with the present.

“Being the only full-time American driver on the Corvette Racing team obviously brings a little bit of extra responsibility with it, but to go to a place like Le Mans and be a part of Chevrolet, racing a Corvette, and representing America is a very special thing,“ said Milner, who by virtue of the Reunion’s open paddocks and casual atmosphere is certain to rub elbows with race fans as well as other attending luminaries--Bob Bondurant, Dick Guldstrand and Dario Franchitti, to name a few—throughout the three-day weekend. (Milner and Ed Welburn, Head of GM Design, will be guests of honor and take the stage at a special Rolex dinner on Friday night; Guldstrand and Bondurant will participate in a joint autograph session on Saturday afternoon before the Corvette Race Car Show on pit lane.)

According to Milner, legendary American race car driver John Fitch won Corvette's first-ever race in 1956 at Sebring, establishing Corvette as a world-class contender. Over the years, there have been many more wins, and the Corvettes have kept pace with the evolution of motorsports--so much so that today's Corvettes are among the most admired sports cars in the world, and the Corvette Racing team is one of the most competitive teams in its class.

When asked about the racing in the days of John Fitch compared to racing today, Milner said, “The car John Fitch raced in 1956 compared to the car I race today are worlds apart. His was basically a street car, and while the cars we race have similarities to street cars, ours are built from the chassis up to do one thing, and that is to race. People in those days could drive their race car to Sebring, race it and then drive it home. Those days are long over.

“The Corvette is the longest continuously running car model ever built, and to think of John Fitch in 1956 winning Corvette's first race back then, and that Corvettes are still being produced today, and here I am still racing the Corvette model, goes to show how much this car is loved and has been enjoyed by so many people over the years. I'm very proud to be racing under this banner."

Adding to the overall fan experience will be the heritage display of significant Corvettes that is presented by Chevrolet. Extremely rare Corvette race cars will be showcased, representing every era, up to and including the all-new 2014 Corvette Stingray. 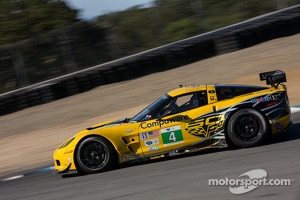 The Rolex Monterey Motorsports Reunion and Pebble Beach Concours d’Elegance highlight the Monterey Classic Car Week of activities on the famed peninsula. Together, these two events attract international visitors to celebrate the world of motoring and motorsports, making it unlike any week of activity in the world. This year, for the first time in 10 years, automobiles participating in the Pebble Beach Tour d’Elegance presented by Rolex will visit Mazda Raceway Laguna Seca on Thursday morning (during the Pre-Reunion activities) to complete a lap around the circuit before continuing on their course that traverses the mountains and canyons of Carmel Valley, the famed 17-Mile Drive, and Highway 1 from Carmel to Big Sur.

Advance tickets to the Rolex Monterey Motorsports Reunion are available, with General Admission tickets beginning at $50 (Friday) and a three-day ticket at $130, which includes a complimentary souvenir magazine. Hospitality packages begin at $200 per person. Children 12 and under are free with a paying adult.

The cars of Ferrari