Our sister website Motor1.com dissects David Kimble's famous cutaway drawing of the most expensive car ever sold at auction.

With Monterey Car Week upon us, it’s fitting to highlight one of the racing legends that typically graces the grounds on California’s coast this week: the Ferrari 250 GTO.

In this second installment of our 'Kimble Kutaway' series (our first was on the Porsche 959), we’ll dissect the 250 GTO – one of the most valuable collector cars of all time. Those lucky enough to own one would have paid nearly $40 million for the privilege, and the list includes both car royalty and household names like Ralph Lauren.

This particular cutaway is of a 1962 Ferrari 250 GTO that was documented from several different sources (there are only 39 of them in the world, after all). Technical illustrator Kimble outlined for us his struggle to piece this car together and, despite the hurdles, the results are nothing short of spectacular.

The process began when Kimble got the (somewhat insane) idea to merge two technical drawings of famous Ferrari homologation models. Kimble focused on the 250 GTO and its rarer (at the time) stable mate, the 288 GTO. While Ferrari corporate was onboard to have Kimble document the 288 GTO in Modena, the 250 GTO documentation and resulting illustration would prove to be quite the mission to complete.

In light of full disclosure, the Ferrari 288 GTO he illustrated presented its own iteration of Murphy’s Law, but we’ll share that another time.

The Ferrari 250 GTO was already a collector car worth more than $1,000,000 when the illustration quest started in 1987. What seemed like a sound proposition to illustrate these cars simultaneously in one frame proved a challenge from inception.

First, there was no corporate 250 GTO available and nothing that Kimble could easily access in its stead. He first located a V12 engine – just the engine – which would prove to be invaluable since no owner would be reckless enough to remove the unit (or its valve covers) for a detailed three-axis look.

Kimble stumbled on a small classic Ferrari shop in downtown Los Angeles that was restoring a few cars and had the V12 he was seeking on an engine hoist. The only issue was this engine was from the Ferrari 275 LM that was a mid-engine application of the same Tipo V12. As fate had it, it was nearly identical and any slight variations could be gleaned from the engine bay of the yet-to-be-located 250 GTO.

Kimble, well-connected in the industry, knew of a place where many 250 GTOs would congregate – well, at least one per annual gathering anyway. He headed up to Monterey Car Week in a new-at-the-time C4 Corvette since Chevrolet was the featured marque there in 1987. Despite driving the 'Vette up Pacific Coast Highway like he was “competing in the Mille Miglia,” he only had Ferrari on his mind, more specifically the elusive 250 GTO.

Upon arriving, Kimble headed directly to the on-track events at the Monterey Historics race. Many ultra-valuable race cars were tearing up the Corkscrew on full song, but one GT car became the focal point for everything Kimble worked towards over the next few days – a 1962 Ferrari 250 GTO in brilliant Rosso Cina.

As soon as the hot laps turned cold and the vintage race cars began a long train into the pit area, Kimble was well positioned to talk to one driver in particular. He struck up a conversation with the owner who was enthusiastic about donating his car for the cause. Since the racing action was busy all weekend, the owner invited Kimble back for a full day affair after the crowds died down.

The photo shoot, measurements, and data gathering operation went flawlessly and the exterior of the 250 GT, along with the mechanics that made it tick (engine aside), were ready to be immortalized in a Kimble illustration. 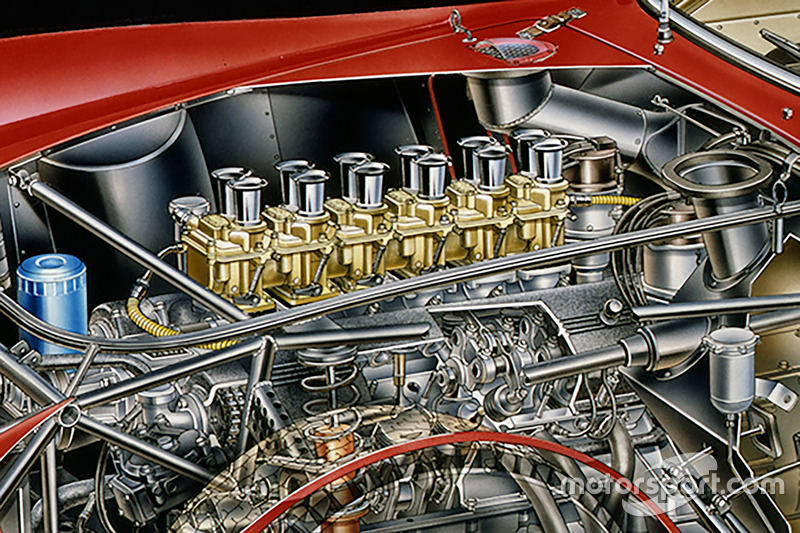 In the racing days of yore, engine builders had limited concepts of how to make power. There was the large displacement route, or, in the case of Ferrari, small displacement with many cylinders and gloriously high redlines.

The engine lurking inside the 250 GTO was not new but rather a 3.0-liter V12 Tipo similar to the one found in the 250 Testa Rossa. This front-mounted engine shared an architecture with the mid-engine Kimble documented at the LA-area shop. The all-aluminum-alloy design was lightweight and proved very reliable in competition; six top-mounted Weber carburetors feeding fuel to two cylinders each, and capped with a glorious set of twelve Venturi stacks (a performance trend at the time).

The net result in horsepower was a then-tremendous 300 prancing ponies peaking near the lofty 8,500 rpm redline. The overall design and dry sump lubrication system proved to be very reliable in competition, where it debuted at the 1962 running of the 12 Hours of Sebring with American driver Phil Hill at the wheel. 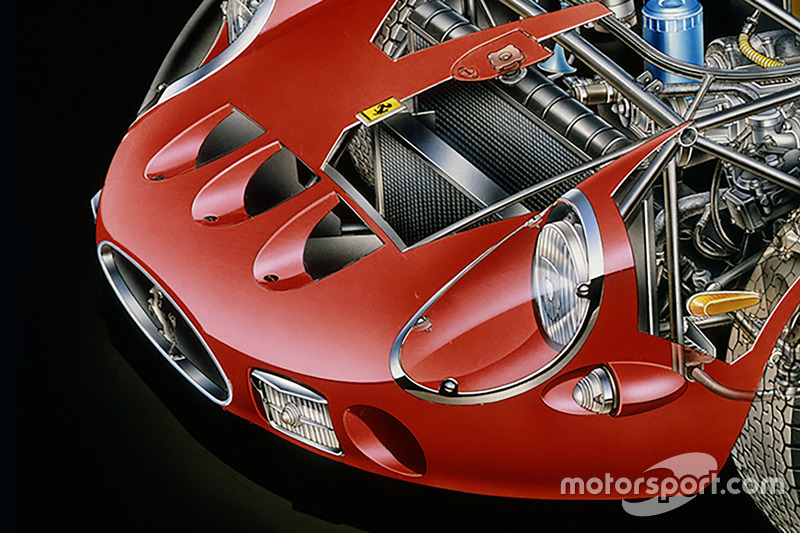 Aerodynamics Of The Decade

Since every one of the 39 Ferrari 250 GTOs was hand-built, there we all kinds of variances from the original design. The car marked a new age for Ferrari using some of the most advanced technologies of the time, including wind tunnel testing at Pisa University. The sultry design of the vehicle followed its function, which happened to evolve into one of the most stunning automobiles the world has ever witnessed.

The design was started by Giotto Bizzarini, but after his dispute and subsequent firing by Enzo Ferrari, Sergio Scaglietti, and Mauro Forghieri also contributed.

The trademark features of the 250 GTO are the elongated hood punctuated by three large radiator inlets. The sculpted inlets came complete with a cover for cold racing applications, to provide a slight edge on aerodynamics.

Early designs did feature a spoiler on the rear of the car, but the example we seen here had the slick-top rear deck. Owners of these hand-built cars did requested changes to the form. And as the years went on, when a Ferrari was crashed, the race teams often requested Scagletti or other fabricators make changes to vents, intakes, and aerodynamics. 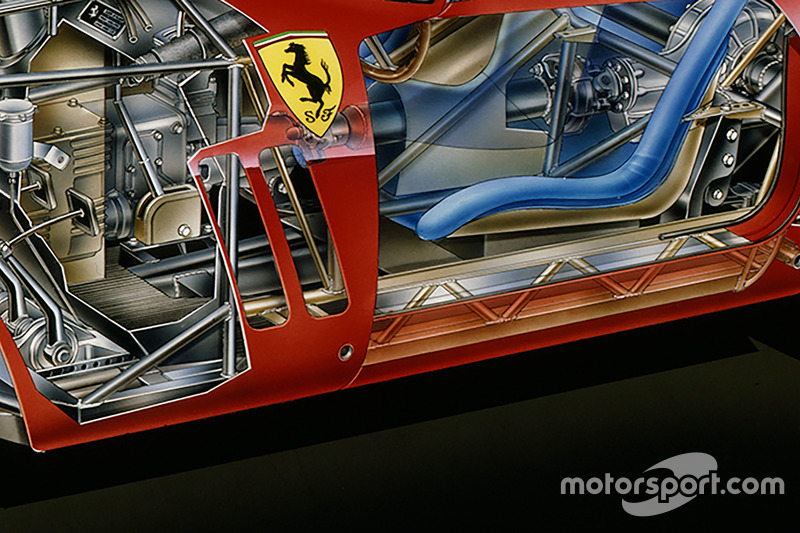 Ferrari opted to stick with successes it had with earlier race cars when developing the 250 GTO chassis. Sure, the automotive world was advancing in quantum leaps in the 1960s, but Modena took an “if it ain't broke…” approach.

Building on the front-engine, rear-drive platform of the 250 GT SWB, the space frame below had modifications only where needed. The 250 GTO frame consisted of hand-fabricated and welded tubing, with strategic modifications to the stiff, light design. The updates meant the overall suspension geometry was altered to achieve a lower center of gravity. The fully independent suspension with front A-arms and rear live axles would prove a winning formula for racing.

Alas, in competition events, the winning ways of front-engine, rear-drive platforms were numbered. The 250 GTO was the pinnacle of racing prior to Ferrari’s mid-engine pursuits. 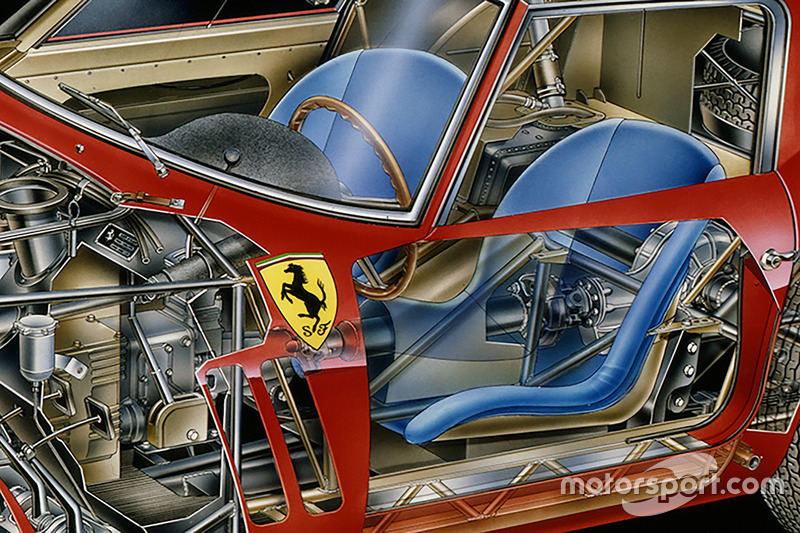 Inside the Ferrari 250 GTO, there wasn't much in the way of luxury. While American cars of the day were rolling showcases of the latest in automotive tech and comfort, most European cars remained austere, and the homologated-for-racing 250 GTO was even more so.

A pair of simple cloth buckets with minimalist lap belts were all that connected driver to chassis. The spartan appointments didn’t stop there, as the 250 GTO came with no speedometer. With no carpeting or headliner for sound deadening, drivers felt like they are were in the engine bay sharing space with the V12. 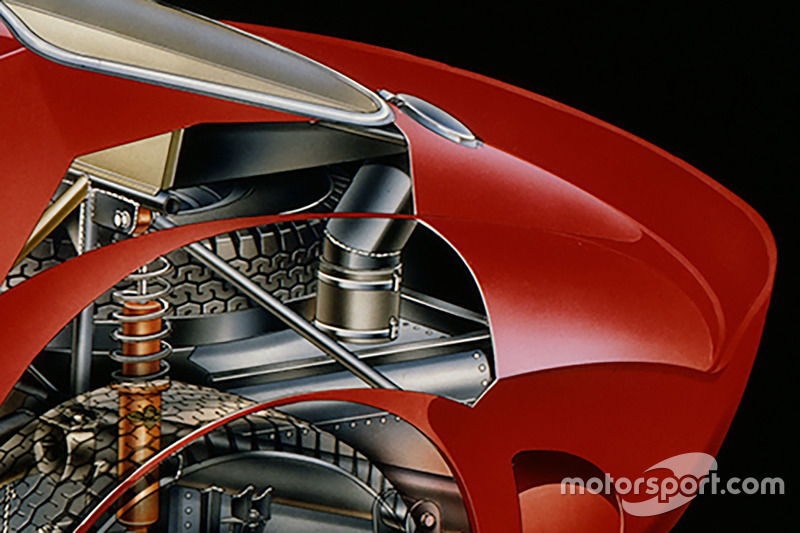 The Ferrari 250 GTO's Place In History

We don’t have to tell you how the 250 GTO has established a racing pedigree and is a favorite among the rich and famous. The 250 GTO driven by Sir Stirling Moss (chassis 3505GT) fetched $35M in 2012 and chassis 5111GT changed hands unofficially for just over that in 2014.

Hard to believe this classic sold for $18,000 when new and at one point in history, during the recession in the early 1990s, lost $10 million in value.

But it’s this Kimble Kutaway that gives us an amazing behind-the-sheet-metal look of the next 250 GTO that will cross the auction block.

Technical illustrator David Kimble has been drawing cutaways of some of the most important cars and race cars in existence for over 50 years. A graduate of the Pasadena Academy or Technical Arts, Kimble has painstakingly produced dozens of accurate cutaways based on actual engineering drawings, CAD files and hands-on inspection documented with photographs. His career pursuit began in 1964 and he has continued to push the boundaries of hand-drawn illustrations appearing many publications including Motor Trend and Car & Driver. Kimble resides in Marfa, TX and operates a studio where these drawings, which often take months to produce are carefully crafted without the use of computer technology.